Homemade biscuits are a favorite with almost any kind of gravy from sausage gravy to hamburger gravy and of course this creamy bacon gravy with lots of crisp bacon and drippings.

A country-style creamy gravy with just a few ingredients and a little whisking. What better way to start the weekend than with a hearty breakfast? Bacon gravy is so easy to make and can be topped on everything from biscuits to waffles. 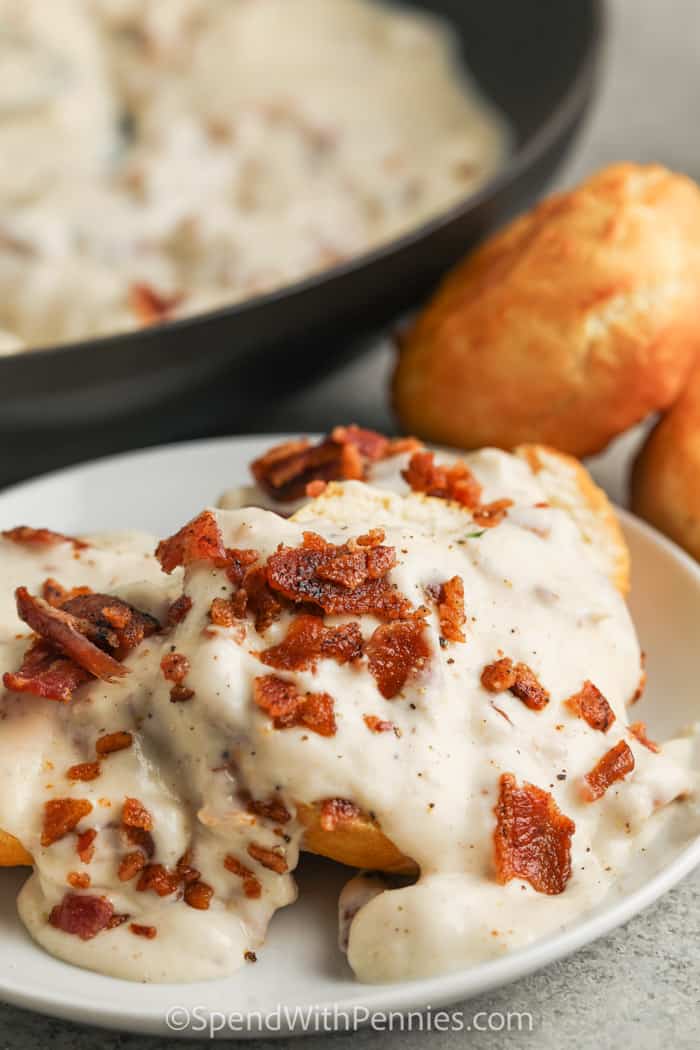 What is Bacon Gravy?

Bacon gravy can either be white or brown but we most often enjoy this country-style gravy. Milk gives the gravy its creamy base while the bacon drippings, bacon pieces, and some salt and pepper give this yummy gravy its unique flavor.

This creamy sauce is the perfect Sunday morning breakfast spooned over biscuits, waffles, or even mashed potatoes or toast. 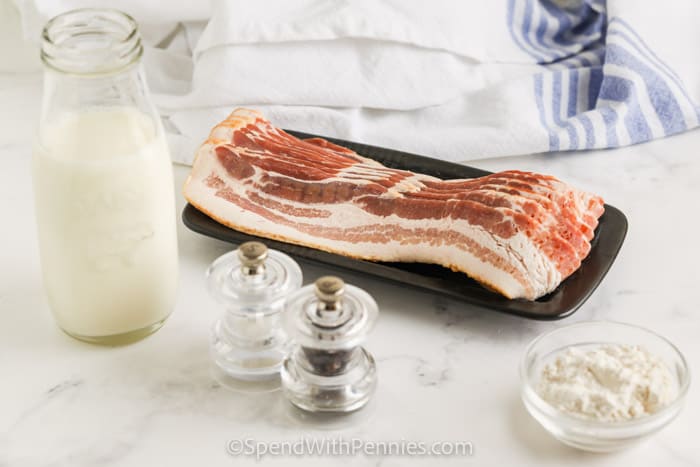 BACON: Any kind of bacon will do. Plain, peppered, or maple will give the gravy a new flavor every time. You’ll need to ensure you get at least 2 tablespoons of bacon grease to make the roux. If there isn’t enough fat, use equal amounts of butter (or cook up extra bacon for BLTs or to add to salads).

FLOUR: All purpose flour is used for thickening. We have not tried this with alternate low carb flour options.

MILK: Whole milk gives the gravy its rich flavor due to its high-fat content you can add a splash of heavy whipping cream if you’d like. 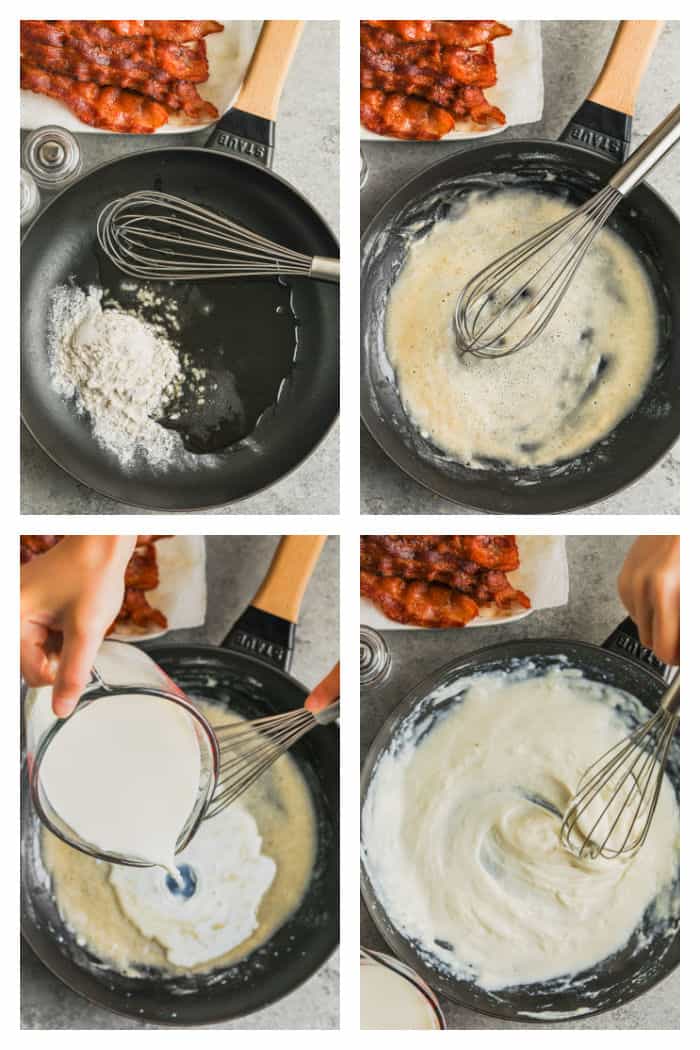 How to Make Bacon Gravy

A little whisking action and some patience make for the best gravy!

Serve over biscuits or cornbread.

PRO TIP: When making a roux, allow the flour and bacon fat to cook for at least 1 minute. Stir in the milk a little bit at a time whisking until there are no lumps, after each addition. The milk mixture will be very thick at first. 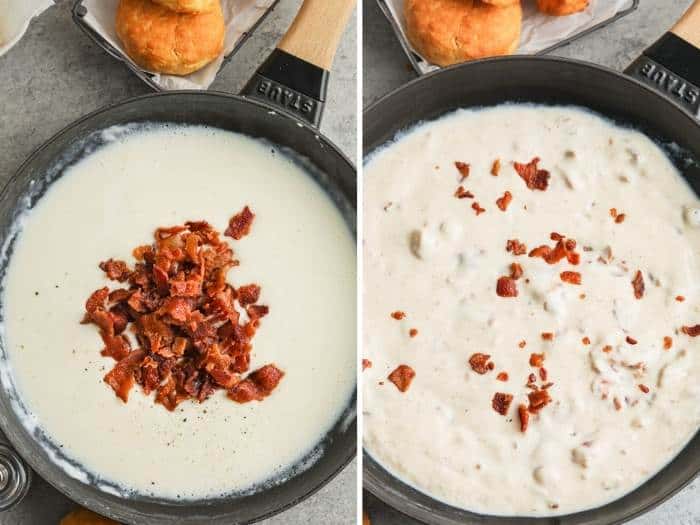 Store bacon gravy in a mason jar or covered container in the refrigerator for up to 4 days. Give it a shake and reheat on the stove.

Did you make this Bacon Gravy? Be sure to leave us a rating and a comment below!

Bacon gravy is creamy, savory, and full of flavor. It’s perfect on biscuits, with waffles, or even on mashed potatoes!

You will need at least 2 tablespoons of bacon fat. If you don’t have enough fat, cook more bacon or add some butter so you have a total of 2 tablespoons.
When making a roux, allow the flour and bacon fat to cook for at least 1 minute. This gets rid of the starchy flavor.
Stir in the milk a little bit at a time whisking after each addition. The milk mixture will be very thick at first.

(Nutrition information provided is an estimate and will vary based on cooking methods and brands of ingredients used.)

© SpendWithPennies.com. Content and photographs are copyright protected. Sharing of this recipe is both encouraged and appreciated. Copying and/or pasting full recipes to any social media is strictly prohibited. Please view my photo use policy here. 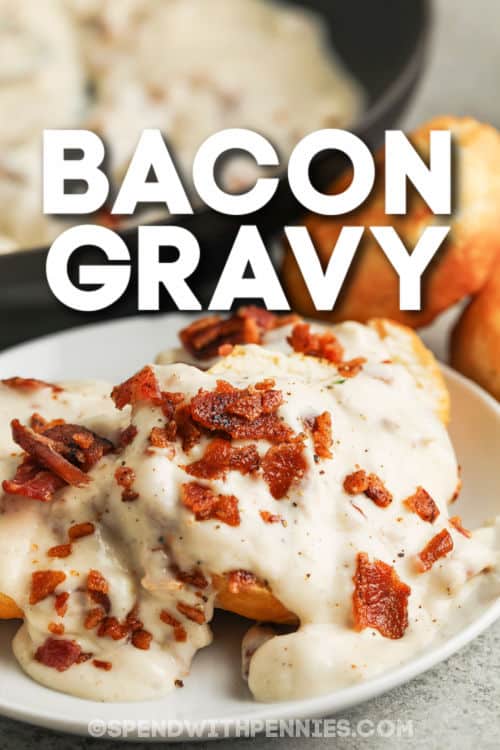 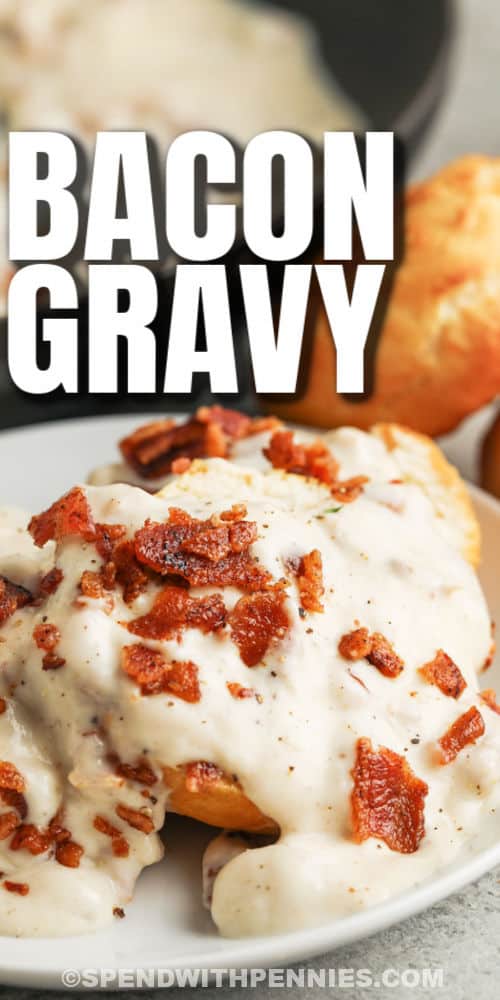 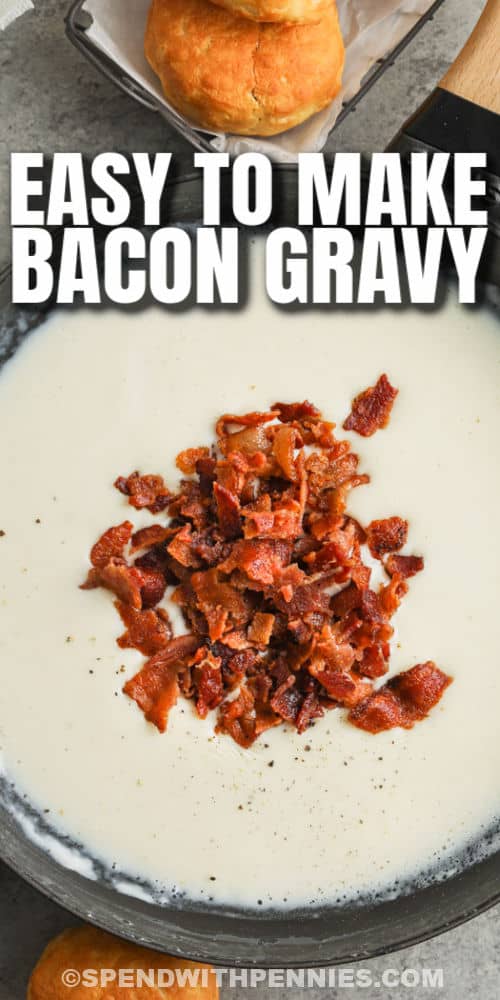