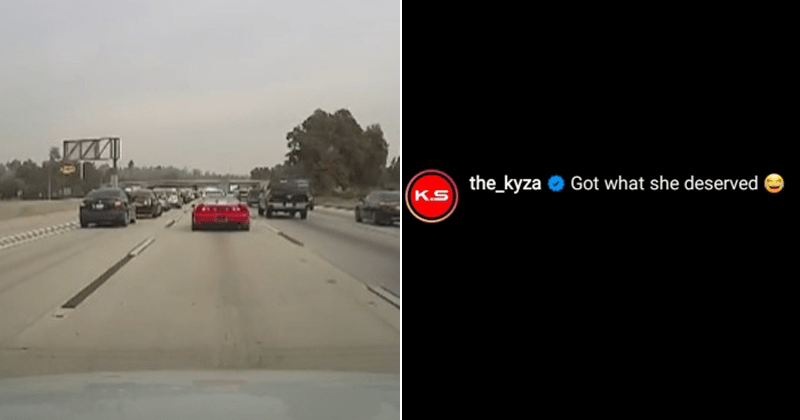 There’s never a good time or place to encounter a Karen, but one of the worst places to deal with her must be when you’re in your car. There are enough shoddy drivers and road rageaholics out there to make driving risky as it is — the last thing anyone needs is someone being rude for no reason when you’re trying to get from A to B.

Nevertheless, that’s exactly what happened to a friend of Ron Baugh when he was driving along the freeway recently. In a video posted to Instagram, Baugh revealed the view from his dashcam as a woman reached out of her vehicle and hit his friend’s car in front of him with a drink. While there’s no doubt that the driver on the receiving end was supremely annoyed, he had no choice but to keep driving. The same could not be said for the Karen, however, as she tried to continue to drive but ended up rear-ending another car that was stopped in traffic in her lane.

Viewers were delighted that the woman got a swift payback. Not only were her actions unprovoked, they could have proved dangerous if the drink had hit the wrong part of the other vehicle. Unfortunately, the driver she crashed into was not so lucky. Here’s hoping that they both have good insurance.