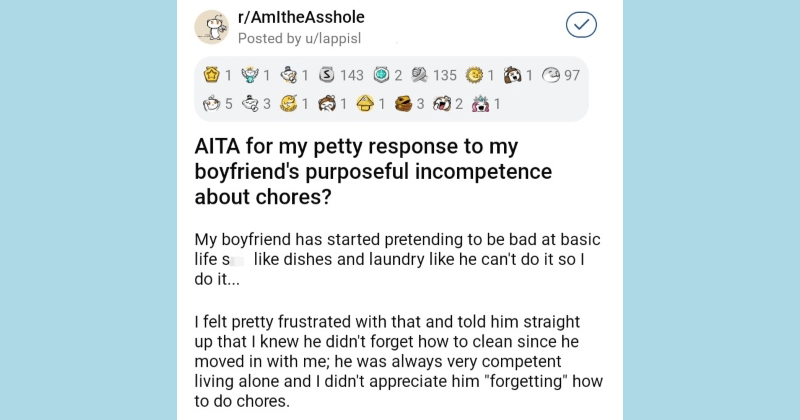 It’s always painful to have a loved one that doesn’t pull their weight in a relationship. It can be a difficult situation to manage, too. Not everyone is going to respond well to getting called out, and if their actions are having a significant impact, all you want is a quick and effective solution.

Sometimes, though, it pays to play the long game. This was the case for u/lappisl, who took to r/AITA to ask if her actions towards her boyfriend were unnecessarily petty. According to her, when the relationship began he had been fine with doing household chores. However, once the pair moved in together he immediately claimed to not know how to do things like laundry or the dishes, leaving his girlfriend to pick up the slack.

Her response was to fake her own incompetence, forcing him to do his share of housework. The story of this perfectly executed revenge immediately sparked the attention of Redditors, most of whom applauded her for her clever solution to the problem. That said, some were disappointed that she went to the effort to school him on his entitlement when she could have ended the relationship instead. One thing’s for certain, this man won’t be pushing the chores onto his girlfriend any time soon. On the other hand, she might be having some second thoughts as well.