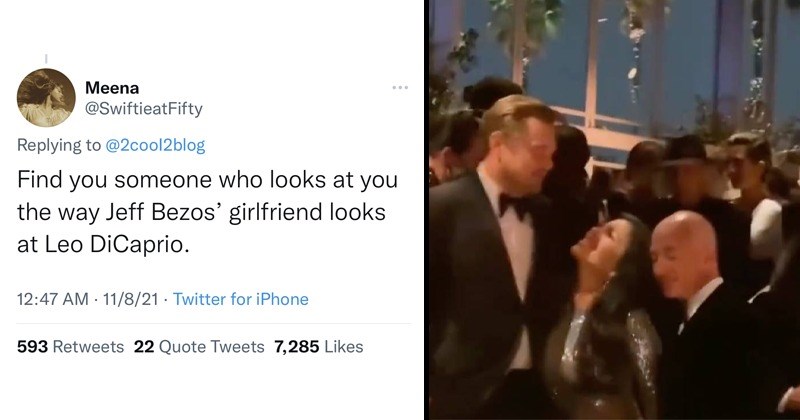 It’s pretty common knowledge that Leonardo DiCaprio doesn’t date anyone over the age of 25. Someone even made a chart about it. It’s pretty much a given that if you’re even a day older than 25, you probably shouldn’t bother trying to get the Oscar-winning actor and environmental activist’s attention. But that doesn’t stop some women from trying. And at the LACMA art gala last night, Jeff Bezos’ girlfriend, Lauren Sanchez, seemed pretty keen on getting flirty with DiCaprio.

In a video of the trio, Sanchez is seen gazing up at the actor in a pretty suggestive and flirty manner. She wiggles and thrusts her bust out at him, laughing like he’s the funniest person she’s every met. It’s a spectacle, and one that’s all the more entertaining that she’s there on the arm of a billionaire. It seems like the Bezos coin isn’t enough to keep her proverbial eye on him. The clip went viral on Twitter following the event, with people mocking both Sanchez’s desperate vibe and Jeff’s inability to keep his partner’s attention. Can’t say we really feel bad for the fellow – or his girlfriend. They kind of deserve each other. That said, we have to give props to Jeff for acknowledging the whole thing with a little Twitter threat. We’d say it’s Leo’s move, but as we said earlier – she’s way too old for him.

Leo, come over here, I want to show you something… @LeoDiCaprio
https://t.co/Gt2v9JZTNz
pic.twitter.com/KqGLB839NI