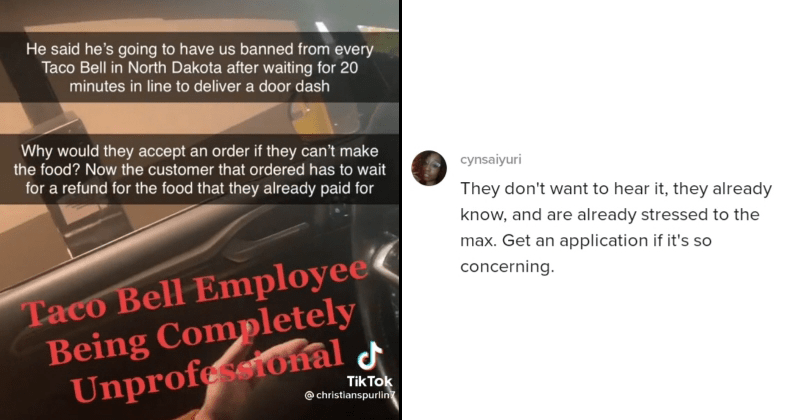 The grand irony of fast food is that for the person consuming it, your meal is meant to be a quick and stress free experience. However, for those preparing it, the reality is often the opposite. Busy, customer-facing roles are difficult at the best of times and with many industries struggling with the labor shortage, things are hotter than ever in fry kitchens across the country.

This could recently be seen in a controversial TikTok, in which a DoorDash driver and a Taco Bell employee have a bitter argument at the drive-thru. The video appears to be filmed by the driver and shows them complaining about the extended wait they have had to collect their order. In response, the drive-thru operator berates the driver for their impatience and emphasizes that they are very understaffed before telling them to leave.

While the DoorDash driver called out this Fargo branch of Taco Bell for its tardiness and supposedly unprofessional staff, not everybody chose to take their side. Many viewers were not impressed about the altercation and sympathetic towards the Taco Bell worker. On the other hand, some people still stuck up for the driver and agreed that the reaction had been rude and unacceptable. Whoever was in the right, there’s no doubt that this was an unpleasant situation for all involved. It just goes to show that we usually don’t know the full story when our food takes a little too long.