Though specifics aren’t yet known as to what caused the assault with a deadly weapon charge, most online initially celebrated the news on social media as word began to spread of his arrest in mid-November 2021.

Reactions ranged from elation at the news to memes about the lawyer and judge who will have to view Shadman’s artwork, being very reminiscent of the memes surrounding Chris-Chan’s incest allegations. For example, on November 11th, 2021, the Twitter account @mr_evaporation tweeted a scene from Kung Fu Panda in which Po is visibly distraught after revealing the contents of a scroll, stating that it would be the judge’s reaction to seeing Shad’s art, earning 20,000 likes in 24 hours (shown below).

The judge looking at Shadman’s art account during the trial pic.twitter.com/ff2aZs0ZAu

Another common meme trend was the belief that Shadman and Chris-Chan could see each other in jail, and somehow know about the other one, as seen in a meme posted on Twitter by Smugry on November 11th, 2021, which uses the Vanya and Five Drive By Each Other meme format, earning 30,000 likes in 24 hours (shown below). 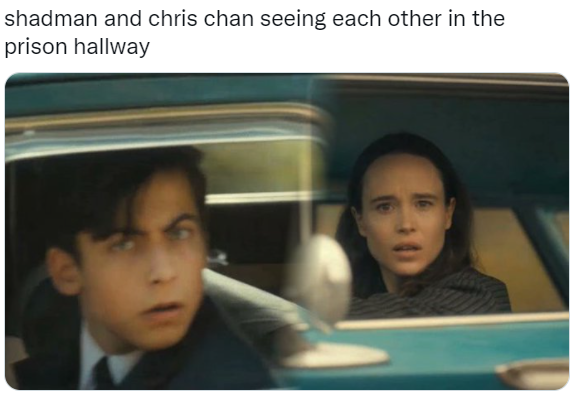