On February 22nd, 2014, ohnoproblems wrote, “John Darksoul is simply a joke that poses the hypothetical that Dark Souls was yet another tired and bland AAA offering with a default doomguy protagonist on a quest to finally be allowed to feel Manly Emotions because the women he has ownership over in his life have been robbed of even more agency by someone who isn’t him.”

In 2016, Tumblr user animedads posted a picture of the player character wearing Smough’s helm, Catarina armor and Havel’s leggings, and wielding the Moonlight Greatsword and Bonewheel shield. They captioned the picture, “it’s ‘Dark Soul,’ the famous protagonist of the hit franchise, Dark Souls! known for his famous quotes: ‘everything is darkest before the soul’ and ‘every soul has its dark.'” The account was deactivated, but the post was reblogged by user addiemonster on April 20th, 2016. It went on to gain over 71,000 notes (shown below). The picture saw reposts on iFunny and Reddit, with some renaming the character “John Darksoul.” 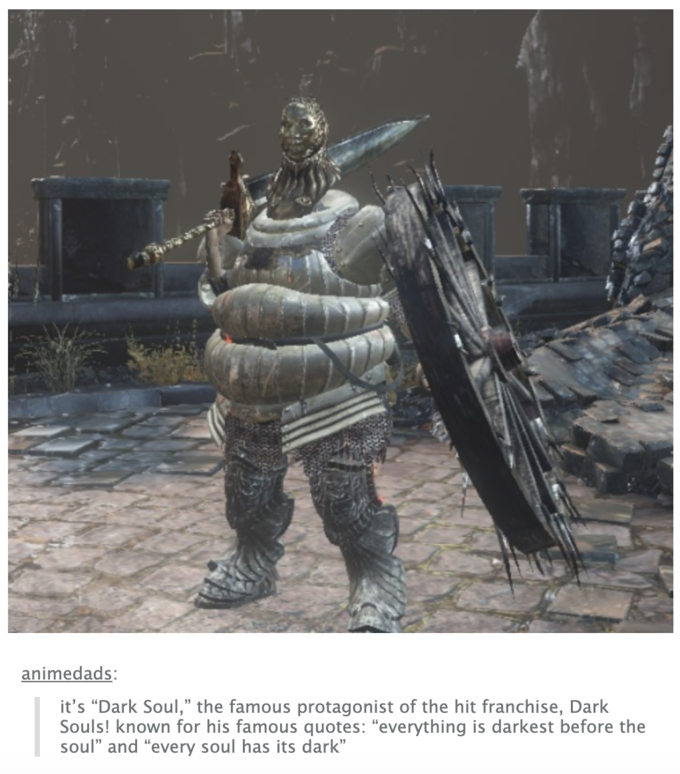