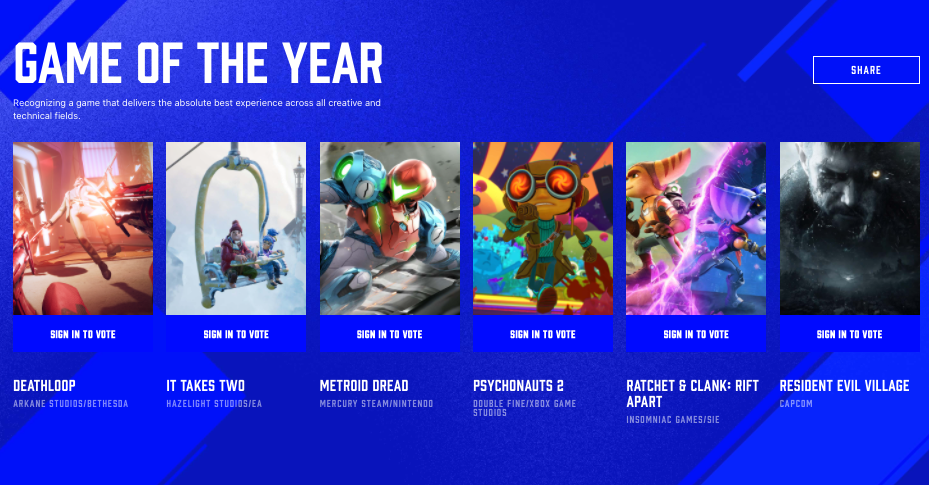 The COVID-19 pandemic undoubtedly had a huge impact on this year’s game schedule, as several major titles suffered production delays. This left a rather scant selection of AAA titles when it came to the nominating of the games of the year. The 2021 nominees for Game Of The Year are Deathloop, Resident Evil: Village, Metroid Dread, Psychonauts 2, It Takes Two and Ratchet and Clank: Rift Apart.

While these are generally well-respected games, their nominations didn’t seem to generate the sort of enthusiasm other GOTY nominees saw in previous years. Many voiced their disappointment that games like Returnal, Hitman 3 and Lost Judgment were not nominated.

not a bad list tbh. i would remove deathloop and resident evil and replace them with forza and either Hitman 3 or Lost Judgment. but it’s been an uneven year anyway https://t.co/DxvIxt9sw9

Damn, what a shit year for games

Returnal got robbed. Game should absolutely be on this list. pic.twitter.com/FpKePueIrp

There was also grumbling about Cyberpunk 2077 getting nominations considering its infamously terrible release state on console and the way CD Projekt Red put developers through a brutal crunch. Several commenters voiced that the game should not be rewarded at all despite its positive qualities.

The fact that Cyberpunk is getting nominated for shit in The Game Awards tells you everything you need to know about the main stream gaming press. I said what I said.

The Game Awards show continues to be utterly uninteresting and without merit. It simply rewards games for being talked about/advertised a lot regardless of quality. This is especially notable in the sub-categories. Deathloop for best story?! Cyberpunk for best RPG!!

It shouldn’t be rewarded after everything.

Others still just had jokes about the entire concept of a “Game of the Year” in a year that FromSoftware didn’t release anything — though Elden Ring looms on the horizon.

Congratulations Elden Ring Network Test Ver. on winning the 2021 video game of the year awards nice one! It was a close call between Bloodborne and Metal Gear Solid 3 but you pulled through!

Game of the Year 2021 is once again Sekiro. It will continue to be Sekiro every year until someone figures out how to make anything feel as satisfying as a posture break and deathblow.

It’s predictable that The Game Awards would generate some backlash over what it nominates in what category, as is the case with any awards show, but this year’s show appears to have players hoping that 2022 has a better slate of games.