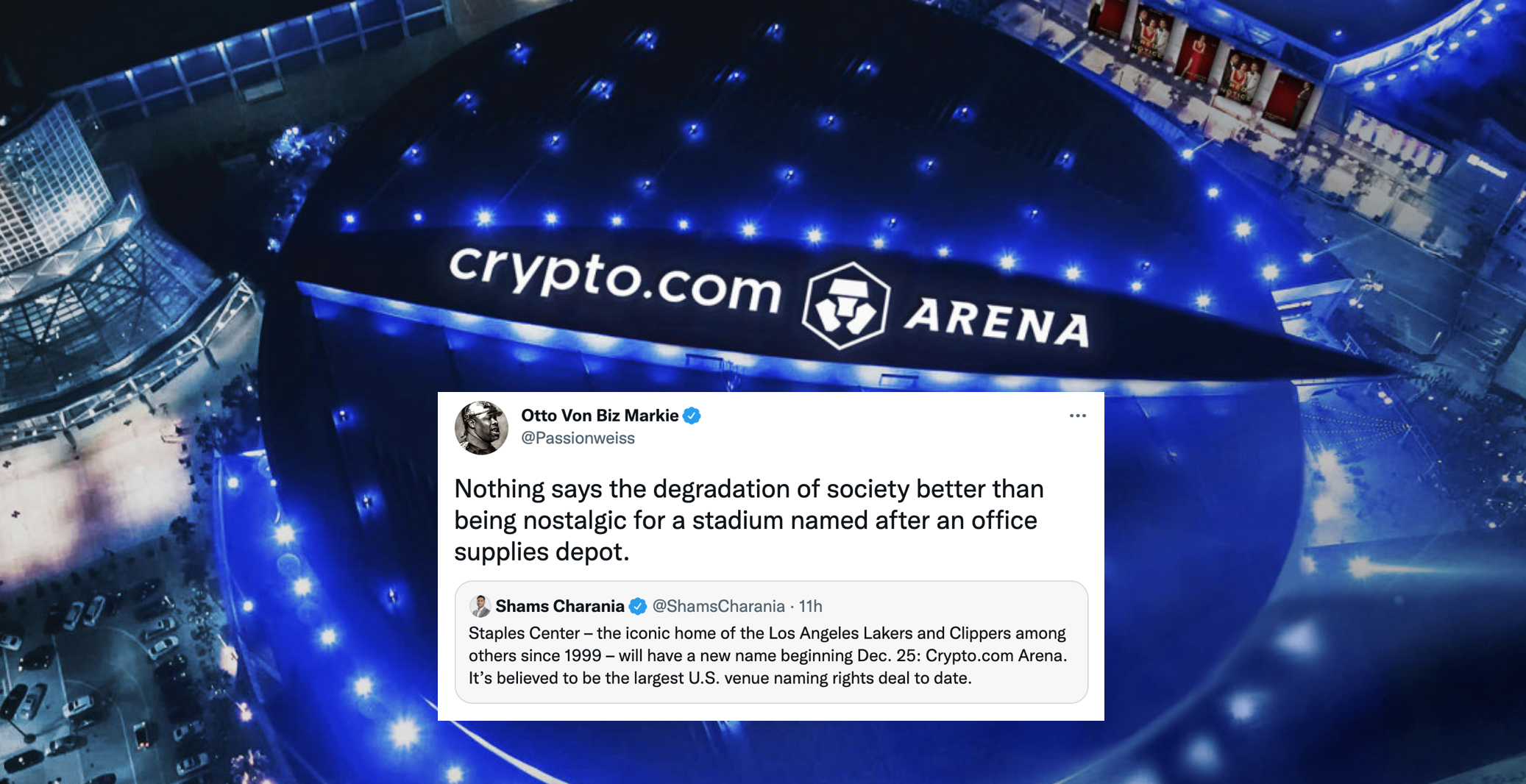 Love it or hate it, cryptocurrency keeps becoming a more mainstream staple of culture, and perhaps there’s no more telling sign of a product’s mainstream acceptance than getting a sports stadium named after it.

Basketball fans were, on the whole, largely disappointed to learn that the Staples Center, the sports arena that is notably home to the Los Angeles Lakers and Clippers, is getting renamed to “Crypto.com Arena.” Crypto.com, a Singaporean cryptocurrency exchange platform, paid over $700 million to AEG (the owners of the arena) for naming rights, making it one of the biggest naming rights deals in sports history.

Staples Center – the iconic home of the Los Angeles Lakers and Clippers among others since 1999 – will have a new name beginning Dec. 25: https://t.co/lur8Hbuv0r Arena. It’s believed to be the largest U.S. venue naming rights deal to date.

Crypto.com’s chief executive Kris Marszalek expressed his excitement for the name change when talking to the Los Angeles Times about the deal.

“In the next few years, people will look back at this moment as the moment when crypto crossed the chasm into the mainstream. This is just such a brilliant move from the guys at AEG, because the next decade belongs to crypto,” he said (rather ominously, one could argue). “And this positions L.A. and this particular venue right at the center of it.”

Online, the announced name change was not received with the same enthusiasm. Many expressed disappointment that cryptocurrency, which remains a highly controversial topic for its environmental impact and propensity for scams, had received such a mainstream win. They also expressed how clunky “Crypto Dot Com Arena” sounded as opposed to “Staples Center.”

You’ve got to be kidding me. At least call it the Crypto Center. How terrible does crypto .com arena sound? I’m depressed.

crypto dot com arena might be the worst sounding arena in all of sports. it makes smoothie king center sound immaculate.

All of the lights dim slightly at the crypto dot com arena as I buy a $4,000 picture of a hot dog

The name change goes into effect on December 25th, marking what looks like it will be a disappointing Christmas for many upset Lakers and Clippers fans. At the very least, basketball fans can look forward to the pearls of color commentary Mark Jackson and Jeff Van Gundy will drop about cryptocurrency.