On October 22nd, 2021, Redditor hugeleakeractually posted to /r/gamingleaksandrumors a rumor that developers Netherrealm were working on a fighting game that featured Warner Brothers characters as fighters. The poster relayed that the idea for the fighter came from the Ultra Instinct Shaggy meme, though that is unconfirmed by Warner Brothers (however, it seems Shaggy’s move set in the game is inspired by the meme). On October 24th, Twitter user Jeff Grubb confirmed the rumor in a tweet, but clarified Netherrealm was not working on the project. 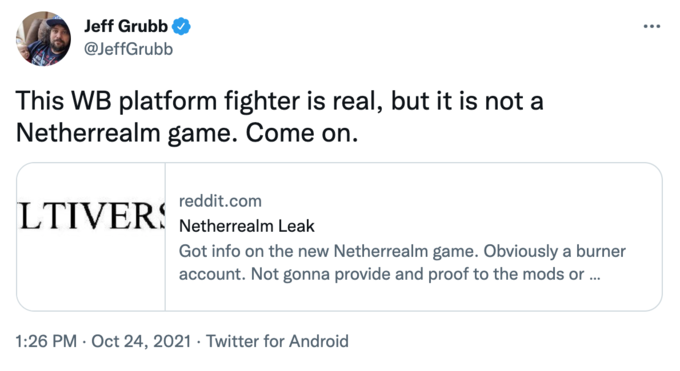 On November 18th, after several weeks of rumors and leaks, the Warner Brothers fighting game, a platform fighter called Multiversus, was announced in a presentation by Tony Huynh, the co-founder of Player First Games and the game’s director. Huynh explained that Multiversus will be a 2 vs. 2-focused platform fighter with 1 vs. 1 matches available. The game will be free to play and have dedicated servers for online play. Members of the cast will be voiced by their usual voice actors, meaning Tara Strong will voice Harley Quinn, Maisie Williams will voice Arya Stark, etc. The game is planned to launch in 2022. It will be free to play, with new characters and skins planned to be added and cost money.