The MSN UK tweet and article and similar articles published in other media inspired jokes about the reasons Queen Elizabeth was taking a long break from making public appearances. On November 17th, 2021, Twitter user @glitterstrands made the earliest found viral tweet about the news, with @glitterstrands guessing that Queen Elizabeth was a contestant on season seven of RuPaul’s Drag Race. The tweet gained over 4,800 retweets and 61,200 likes in two days (shown below). 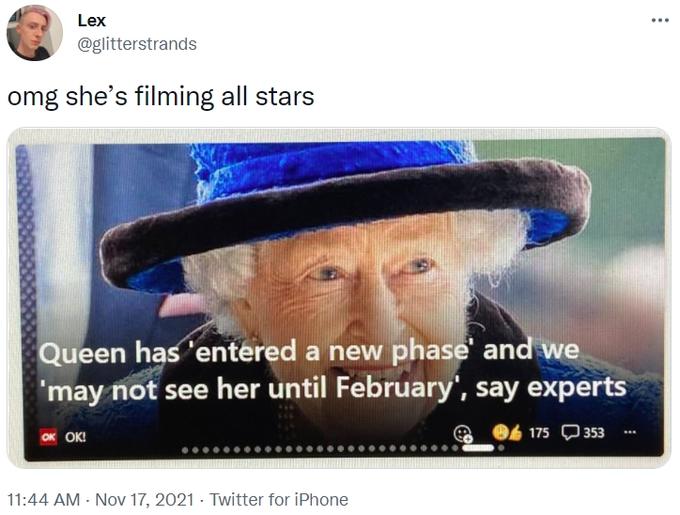 On November 17th and 18th, multiple viral posts referencing the news and guessing the reason for Queen’s absence were posted on Twitter. For example, on November 17th, 2021, Twitter user @staidindoors posted a joke about Franz Kafka’s Metamorphosis that gained over 6,600 retweets and 79,000 likes in two days (shown below, left). Later that day, Twitter user @jilltwiss joked that Queen had attempted to give herself bangs, with the tweet gaining over 1,400 retweets and 24,400 likes (shown below, right).