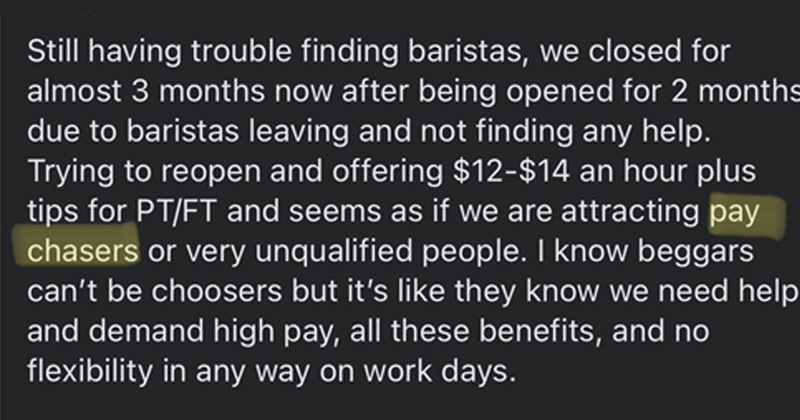 As business owners struggle to hire people for low pay and zero benefits, some of them are taking to the internet to complain, or ask for validation. Thanks to Twitter, one such owner went viral for a post they made to a group for coffee business owners on Facebook.

In the post, Heather Hickinbotham refers to potential employees as “pay chasers,” saying “it’s like they know we need help and demand high pay, all these benefits, and no flexibility in any way on work days.” The phrasing has ruffled some feathers, as much of what she’s complaining about is considered pretty standard. Regarding flexibility, it’s not uncommon that businesses in the service industry provide zero stability where schedules are concerned – something that really affects a person’s quality of life. It’s strange that a coffee shop owner would expect highly qualified individuals to jump at the opportunity to earn $12 an hour – and strange that she is seemingly unwilling to train applicans. It almost feels as though she shouldn’t be running a business. Judging by these replies, a lot of people agree.