By 11PM that night, roughly five hours after the initial selling of the Flurks, it was announced that OpenSea had officially De-Listed the collection, meaning it could not be bought, sold, or even shown on the marketplace. The play was then to move the buying and selling of Flurks over to Rarible, which also followed suit the following day in removing them from the marketplace. While originally intending to stifle the growth and awareness of the collection, it instead had the opposite happen, which is commonly referred to as The Streisand Effect. People began to call out OpenSea and Rarible, as the blockchain technology they are built on is supposed to be de-centralized and free from rules, for their censorship of a collection on political grounds alone, as seen in the tweet by RemigiusCrypto (shown below). 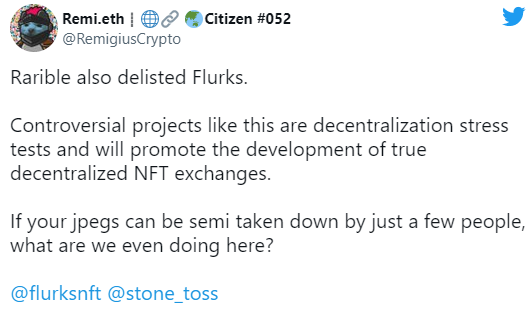 StoneToss and those who follow the project took the de-listing in stride, and started using it as a marketability tool. Future tweets by StoneToss and others refer to the Flurks as illegal memes, and say that the only real way to buy them now is P2P, which makes it fall more in-line with the original network of early-life Cryptocurrency. Ironically, though StoneToss and Flurks have been accused of Nazism, Flurk owners and enthusiasts started to liken Flurks to a persecuted and in danger class, using the same rhetoric as those who were under fire by Nazis, as seen in the tweet by JoelNeumann, stating that Flurk Lives Matter (shown below).