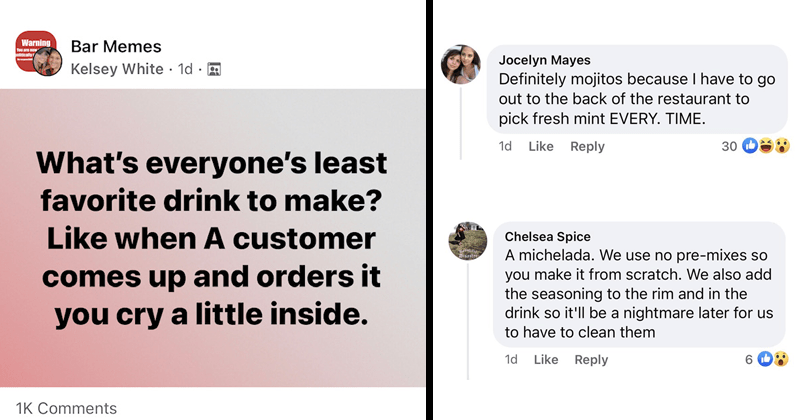 It’s no secret that bartending can be a frustrating gig. It’s tough standing for hours on end, dealing with annoying drunk people and bad tippers. Sometimes things even get physical. But the most annoying part of the job is sometimes as simple as making a mojito. That’s what we’ve learned from a particularly educational thread on the Bar Memes Facebook group. The community is a haven for service workers, a place where they can share jokes, experiences, and even ask for advice with the knowledge that most people will be sympathetic or helpful. It’s a great way commiserate with fellow drink slingers. Yesterday, one bartender decided to rile up the group with a seemingly simple question: “What’s everyone’s least favorite drink to make?”

The post received a thousand comments. Some of the replies were expected; mojitos are an absolute pain in the ass to make. But others? Well, let’s just say we had no idea that Lemon Drop shots are nearly universally loathed in the bartending community. Definitely going to steer clear of ordering them – or anything with Tajin – after reading these replies.