In 2015, Black Friday strikes occurred again. Shown below is a YouTube video posted on November 28th, 2015, by the channel Naomi Ishisaka of a protest happening in Seattle, Washington. The video received 377 views over the course of six years.

On October 21st, 2021, mods of Reddit’s r/Antiwork made a post titled, “ANTIWORK MEGATHREAD: BLACKOUT BLACK FRIDAY.” The post detailed how customers shouldn’t shop during Black Friday 2021 to stand in solidarity with workers who can’t take off from their jobs in fear of being fired. The post (shown below) received roughly 14,000 upvotes over the course of one month. It also linked Redditors to the newly created r/BlackFridayBlackout subreddit, which was created on October 29th, 2021, as well as to a website for the movement, called blackfridayblackout.info. 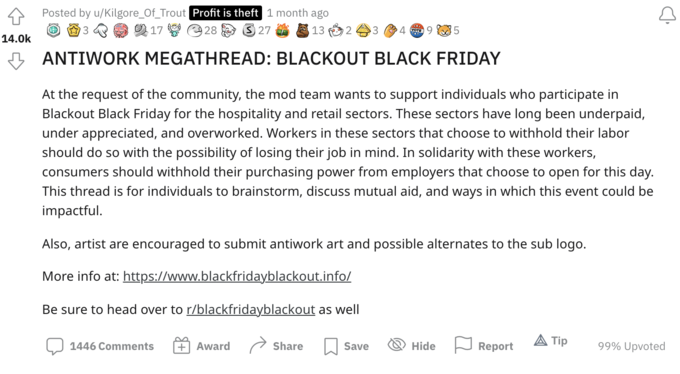