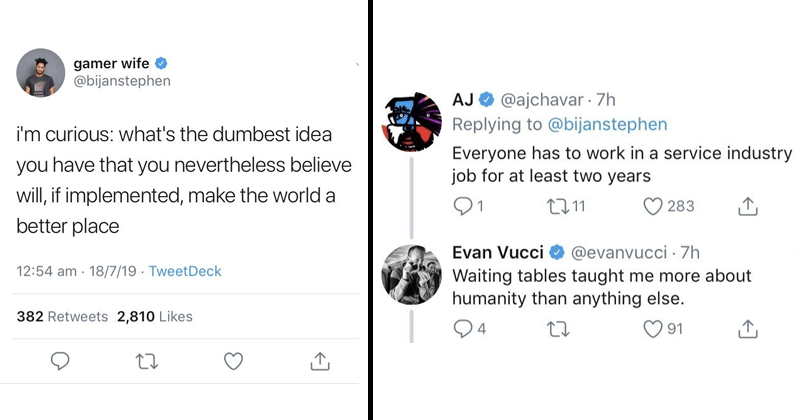 We all want to make the world a better place. But many of the problems we face as a planet or society are a tad daunting. Curing cancer doesn’t seem like it’s happening any time soon. Attempting to attain world peace seems hopeless. World hunger might be easier, but the people with the money just don’t seem to care. Instead of focusing on these grandiose issues, what if we tried to make changes that are a little more realistic? Podcaster Bijan Stephens must have wanted to see what would be possible if we shifted our focus in just that way.

i’m curious: what’s the dumbest idea you have that you nevertheless believe will, if implemented, make the world a better place

Stephen asked his followers to share their most brilliant yet dumb schemes that might just make a difference – and we have to say, they weren’t wrong. We absolutely agree that people should have to work in service for at least two years. It would make the world a much, much more empathetic and less Karened-up place. It’s also hard to argue with universal nap time. And those are just two of many, many responses that made us nod in agreement. So we’ve put together some of the better nuggets of wisdom, but the thread is jam-packed with genius. If we can get the government to back some of these suggestions, we’d be well on our way to a utopia.