Never let anyone tell you the dumb, “deep” thoughts you had when you were 14 don’t have the power to change the world: as demonstrated by a recent fiasco involving the Museum of Modern Art, one thoughtful teenager’s 2008 PostSecret post basically invented a part of art history.

On Monday, the Museum of Modern Art (MoMA), tweeted a Frida Kahlo quote to give its Twitter followers a little pep for the start of their week.

“I used to think I was the strangest person in the world,” the quote read. “But then I thought there are so many people in the world, there must be someone just like me who feels bizarre and flawed in the same ways I do.”

“I used to think I was the strangest person in the world but then I thought there are so many people in the world, there must be someone just like me who feels bizarre and flawed in the same ways I do.” — Frida Kahlo

While this seems like a plausible thing for Kahlo to have said, the fact is she didn’t say it all: rather, a girl named Becky made up the quote for a 2008 PostSecret picture, slapped it over a picture of Kahlo, and the quote has been misattributed to Kahlo ever since. Twitter user @trophyhuman pointed this out to the Museum of Modern Art the following day.

frida kahlo didn’t say this, my friend becky wrote this on a picture of frida kahlo and sent it to postsecret in 2008 and it’s been attributed to kahlo ever since!!!!https://t.co/eyR0wOwt7L https://t.co/p4nsgWEo01 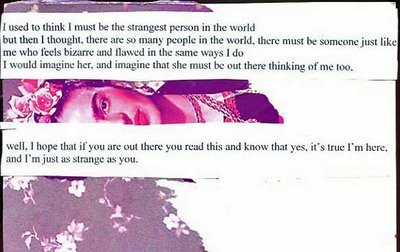 This fact was already confirmed by the website Quote Investigator, who discovered the actual quote came from Rebecca (Becky) Katherine Martin.

“I pasted these lines of text onto a ripped magazine clipping of Kahlo, and mailed the postcard to PostSecret (http://postsecret.com/),” Martin wrote in 2015. “My little image was at the top of the blog one Sunday, and the girl that I was felt a glow of solidarity. Not so alone. The comments were so kind, I think I still have them saved to my computer.”

Twitter users got their yuks in at the MoMA’s error, especially since it’s expected that the museum should be an authority on art history.

Not MoMA misattributing this quote to Frida Kahlo, when, in fact, it was a girl named Becky circa 2008 all along. https://t.co/8HlSQqUbal

I laugh a little every time this fake quote goes around, but MoMA doing it is a great self-own. Finally something more embarrassing than all the educators I know who constantly do the same thing. https://t.co/9tDFaLHPPO

This just goes to show you should always post everything that pops into your head because you just might shape the course of history.