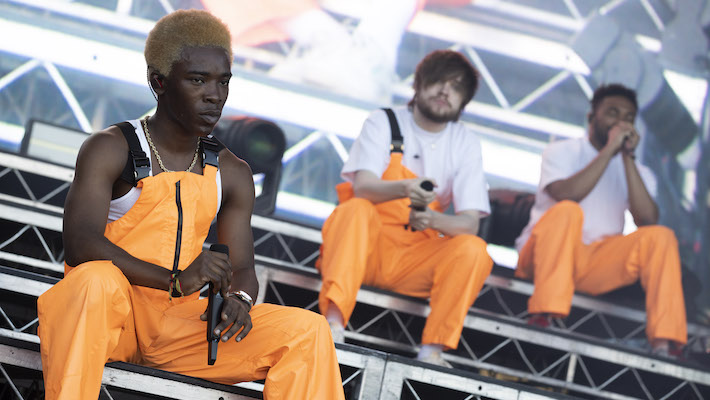 Chaotic hip-hop supergroup Brockhampton is a little under two years removed from their last full-length project, Ginger. Although their 2020 saw the release of a solid spate of singles — which have all been pulled down since — they were otherwise off the radar for most of the past year. They poked their heads above ground earlier this week with the release of the Danny Brown-featuring “Buzzcut,” presaging an impending return. Now, we know just when that return will be with the announcement of their new album.

Titled Roadrunner: New Light, New Machine, the next project will drop on April 9, accompanied by a live-streamed concert from Rick Rubin’s Shangri-La Studios in Malibu. According to a press release, it was inspired by the events of 2020, which forced the once tight-knit group to come to grips with growing up, growing apart, and reconnecting as life slowed down for the whole world.

It’ll also come with a limited edition box set featuring a T-shirt in black, blue, or white and a CD of the album with four additional bonus tracks. The band’s also made some musical changes as well; in-house producer Jabari Manwa will contribute vocals, while the group is also set to collaborate outside of their immediate circle for the first time.

Roadrunner: New Light, New Machine is out 4/9 on Question Everything/RCA Records. You can pre-order a limited edition box set here.

BlackBerry Ltd. has agreed to stop adjusting its revenue, an issue highlighted by MarketWatch in the past, after receiving a comment letter from the Securities and Exchange Commission questioning the practice. The cybersecurity company BB, -4.91%, formerly best known for its eponymous and pioneering smartphone products, highlighted non-GAAP revenue, or revenue that does not conform […]

CJ Dances And Dazzles In His Fiery ‘Set’ Video

Staten Island rapper CJ continues his quest to dominate pop culture with the video for “Set” from his debut EP Loyalty Over Royalty. This brings the total number of music videos from that project to five of eight, including “Whoopty,” his original breakout hit, “Bop,” its first follow-up, and “Real One,” which he released in […]

During the lead-up to this year’s Grammys, Bruno Mars and Anderson .Paak made it clear that they wanted their new supergroup, Silk Sonic, to perform during the broadcast. They made a big stink about it on Twitter, trying to convince the Recording Academy to give them a performance slot during the 2021 ceremony. As many […]

In the wake of a video surfacing that depicts a physical altercation between rappers Quavo and Saweetie at her North Hollywood apartment, TMZ reports that the LAPD is now investigating the situation. Law enforcement sources told TMZ that the department wants to question both rappers separately to obtain a clearer idea of what happened before, […]