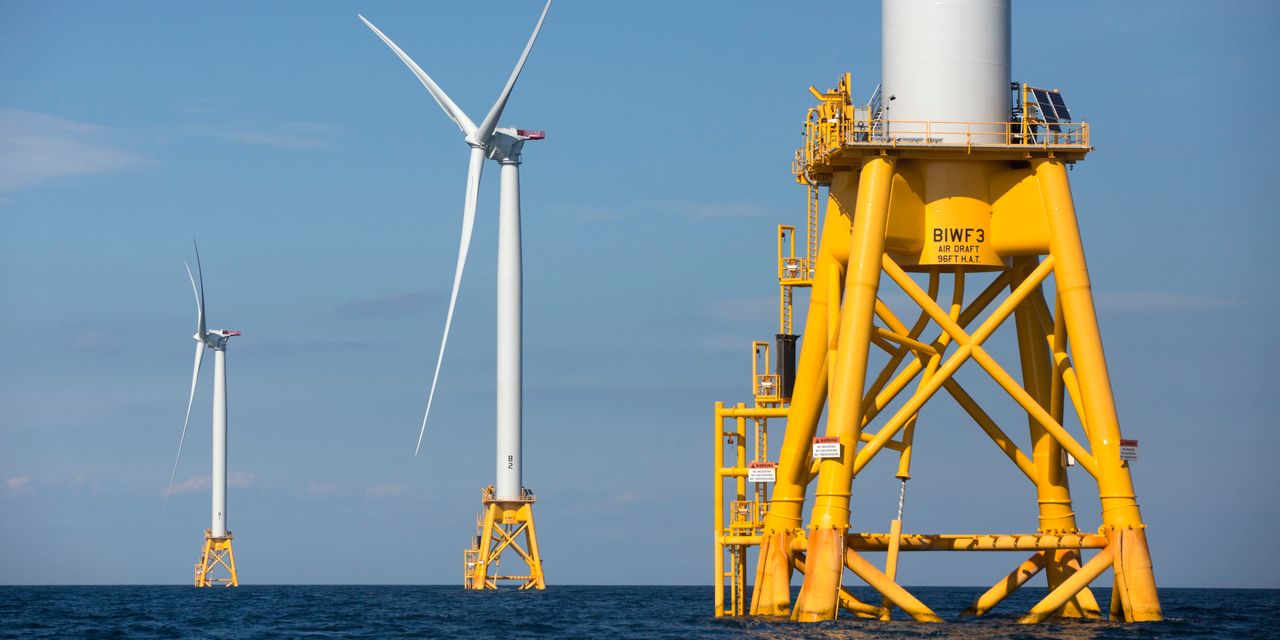 The administration said it is pushing wind energy for job creation and economic opportunity along the Atlantic Coast, in the Gulf of Mexico, and in Pacific waters.

Through its Interior, Energy, Transportation and Commerce Departments, the administration announced a shared goal to deploy 30 gigawatts of offshore wind power by 2030, “while protecting biodiversity and protecting oceans,” White House Press Secretary Jen Psaki said during a briefing Monday.

The New York and New Jersey coasts are seen as a priority for wind-power interests and state officials.

The wind-power industry will also spawn new supply chains into the nation’s interior, as illustrated by the 10,000 tons of domestic steel that workers in Alabama and West Virginia are supplying to a Texas shipyard where Dominion Energy D, is building the nation’s first Jones Act-compliant wind turbine installation vessel. The Jones Act regulates maritime commerce in the U.S.

That target output would more than triple what the country is on pace for by 2026 if permits were issued without delay, according to trade group estimates, the Wall Street Journal reports. The administration is planning new lease sales and to complete reviews of at least 16 operations plans by 2025, it said. Roughly 10 proposals are already in the queue at Interior.

“Meeting this target will trigger more than $12 billion per year in capital investment and projects on both U.S. coasts, create tens of thousands of good paying union jobs, with more than 44,000 workers employed in offshore wind by 2030 and nearly 33,000 additional jobs in communities, supported by offshore wind activity,” Psaki said.

Psaki said the projects are expected to generate enough power to meet the demand of more than 10 million American homes and avoid 78 million metric tons of carbon emissions.

“President Biden believes we have an enormous opportunity,” Gina McCarthy, the White House national climate adviser, said in a statement released in advance of a video presentation Monday to state officials, labor leaders and wind industry executives. “Nowhere is the scale of that opportunity clearer than for offshore wind.”

Read: How much do Biden’s clean-energy jobs pay, and which U.S. states have the most?

That $2 billion project would create 800 megawatts of electricity, enough to power 400,000 homes in New England, and would be the first utility-scale wind power development in federal waters.

Vineyard Wind is significantly farther offshore than Cape Wind, a previous Massachusetts offshore wind project that famously failed amid opposition from the Kennedy family and businessman William Koch, among others, who considered it a bird-killing eyesore for ocean views.

The president of the American pro baseball team the Oakland Athletics (A’s) recently discussed the ballclub accepting bitcoin for full season suites on Bloomberg TV. A’s president Dave Kaval explained that the team will be holding the crypto asset it obtains from sales, rather than selling because they are “believers in it.” The Oakland Athletics […]

Japanese investment giant SoftBank has agreed to pay $2.8 billion for a 40% stake in Norwegian warehouse automation company AutoStore. SoftBank SFTBY, +4.87% will buy the stake from U.S. buyout group Thomas H. Lee Partners and Sweden’s EQT EQT, -4.54% in a deal that values AutoStore at $7.7 billion, including debt, the two companies said […]

Morgan Stanley is set to offer wealthy clients the ability to invest in bitcoin funds, making it the first major U.S. bank to do so, CNBC reported on Wednesday. The investment bank MS, +0.86% told financial advisers in an internal memo that it would provide wealth-management clients access to three bitcoin-related funds, according to the […]

: Watch out Tesla. This new Mercedes-Benz ‘could be a game changer,’ says Deutsche Bank.

The newest all-electric luxury vehicle from Mercedes-Benz has the potential to improve the perception of the entire brand and will be a “Tesla fighter,” according to Deutsche Bank. Analysts at the bank said on Monday that the launch of the full-size luxury EQS sedan “could be a game changer” for Mercedes-owner Daimler, as well as […]