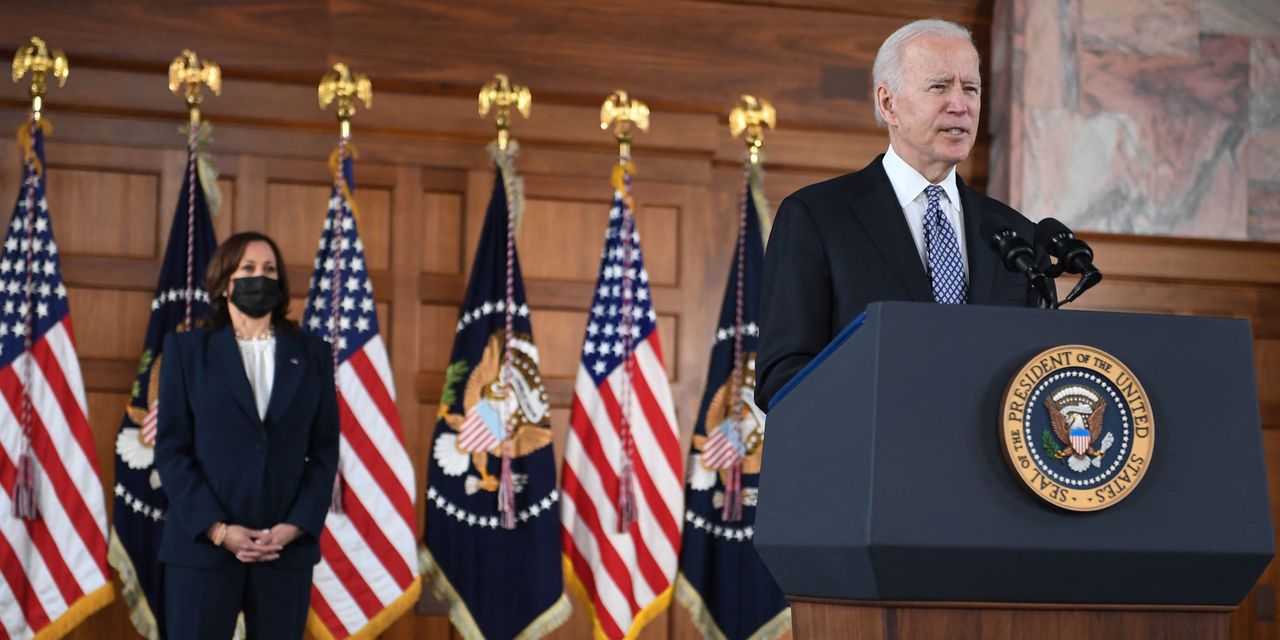 President Joe Biden and Vice President Kamala Harris expressed outrage and sympathy on Friday as they visited Atlanta to meet with Asian-American leaders in the wake of shootings that left eight people dead, including six women of Asian descent.

“Hate can have no safe harbor in America,” Biden said in a speech at Emory University. “It must stop. It’s on all of us, all of us together to make it stop.”

Biden and Harris had originally planned to promote the recently enacted $1.9 trillion COVID-19 aid package on their trip to Georgia, but postponed a political event due to the Tuesday-night shootings, according to the White House. The president and VP instead spoke with local Asian-American leaders about the shootings and and other recent threats, following that up with brief speeches at Emory.

The killings in three Atlanta-area massage businesses came after a spike in anti-Asian violence nationally. Authorities said the suspect, a white 21-year-old, apparently lashed out at what he saw as sources of temptation, but those statements that his actions weren’t racially motivated spurred widespread skepticism.

Read more: ‘Asian-American businesses are dealing with two viruses’: Reeling from racist incidents, many are hurting financially during COVID-19

“Whatever the killer’s motive, these facts are clear,” Harris said. “Six out of the eight people killed on Tuesday night were of Asian descent. Seven were women. The shootings took place in businesses owned by Asian-Americans. The shootings took place as violent hate crimes and discrimination against Asian-Americans has risen dramatically over the last year and more.”

In his address, Biden also called on Congress to pass a bill called the COVID-19 Hate Crimes Act, and he urged the Senate to join the House in reauthorizing the Violence Against Women Act.

Biden and Harris also visited the Centers for Disease Control and Prevention to receive an update on the fight against the COVID pandemic.

“We owe you a debt of gratitude,” Biden told workers at the CDC, an agency that’s based in Atlanta. “This is a war. You are the front-line troops.”

In addition, Biden had been expected to meet Friday with Stacey Abrams, a Democrat who ran for Georgia governor in 2018 and was influential in flipping the state to her and Biden’s party in last year’s election. With Democratic victories in Georgia’s Senate runoff races, the party gained control of the chamber. The Senate passed Biden’s COVID aid package earlier this month on a party-line vote.

U.S. stocks DJIA SPX closed mostly lower Friday and booked losses for the week, with bank shares under pressure after the Federal Reserve said it would not extend temporary relief from capital-requirement rules.

For years, people have been noticing how certain predictions of the future in The Simpsons end up actually coming true, like Trump’s presidential campaign and Kamala Harris’ Inauguration Day outfit. But now, people have noticed that Donald Glover’s Emmy-nominated series Atlanta may have coincidentally made an accurate pop culture prediction about Justin Bieber. The singer […]

The Tell: The new S&P 500 bull market is about to enter its second year. Now what?

The S&P 500 index recorded its best 12-months of performance in the history of the index’s publication on Tuesday, a gain of 74.78%, following its spectacular bear-market plunge a year ago. While the S&P 500 SPX, -0.76% closed modestly lower Tuesday, its overall climb during the pandemic adds up to the largest 12-month gain for […]

CityWatch: Who will be the last New Yorker to die of COVID-19?

In every war, no matter how long and grueling, someone is going to be the last soldier to die. It was Charley Havlat in World War II. Adolf Hitler killed himself on April 30, 1945, but the fighting didn’t stop then. Though many German units were retreating, Allied troops battled on with Nazi holdouts until […]