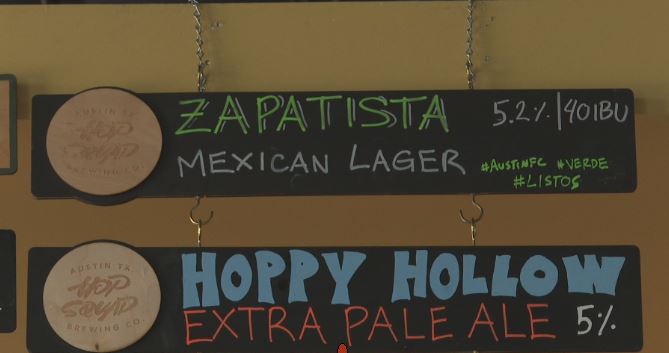 AUSTIN (KXAN) — The first Austin FC home game in Q2 Stadium is quickly approaching, but fans have been tailgating near the stadium since the season first started.

“Our focus is creating the best game day environment,” said Jeremiah Bentley, a member of Los Verdes, a group of more than 1,300 fans that come together for every game. “We are definitely ready for June 19 when we will have 20,000 fans in the stadium.”

Bentley says while they anxiously wait for June 19, the bars, restaurants and breweries near Q2 Stadium have been drawing big crowds. Los Verdes has claimed Hopsquad Brewing Co. as their tailgating spot.

How to find The CW Austin to watch Austin FC

“All the beers we make are done right here in this back room,” said Greg Henny, general manager of Hopsquad Brewing Co. He pointed out the view of Q2 Stadium, which can be seen from the tasting room.

You could call it brew with a view, and the crowds are only getting bigger each game, Henny says.

“It is getting to be bigger and bigger each week,” Henny said. “We are now seeing hundreds, now approaching thousands of people coming through here on game days.”

Los Verdes is not the only supporter group in the area, Bentley says.

RELATED: Everything you need to know about Austin FC, MLS

“There are really two big supporter groups for Austin FC, Los Verdes and Austin Anthem, and there are smaller groups all around town,” Bentley said. “We both throw watch parties and sometimes it happens where we will be at Hopsquad and they will be at Circle Brewing, which are right next to each other, and it will be a big parking lot party.”

“Our numbers have definitely ticked up as a result of supporters coming out to support us it has been fantastic we have been hiring more people,” Henny said.

With the first home game just around the corner, Henny says they are preparing for one of the biggest weekends yet. They even plan to have a special guest play the day of the game.

“This whole neighborhood every brewery every restaurant everyone here it is just going to be a party,” said Henny.

Hopsquad partnered with Los Verdes to brew Zapatista, which is a Mexican lager. The beer is a popular choice for fans on game days.

Henny says Hopsquad’s beer is not served inside the stadium, but they are hoping that will change in the future.

2 of R. Kelly’s defense lawyers out just months before trial

Poll: How Hyped Are You For Nintendo’s E3 Direct?

A Guide to Popular PHP Frameworks for Beginners