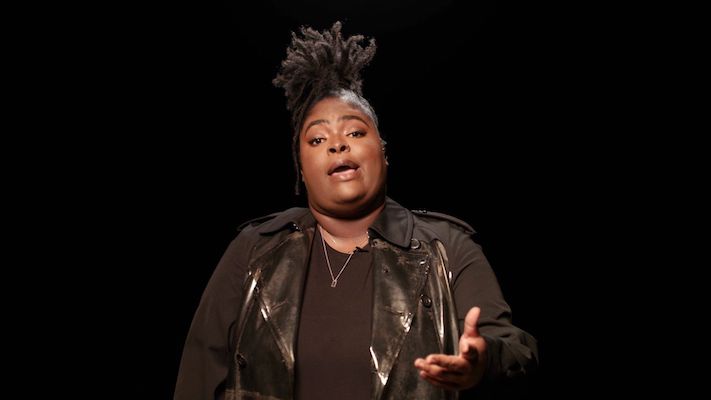 With her new EP dropping this week, Chika stopped by Spotify Sessions to offer up a soulful performance of her song “U Should,” along with a poetic cover of Billie Eilish‘s “My Future.” In a funny twist, Chika is up for the Grammy Award Eilish won at last year’s ceremony, Best New Artist. She noted as much in a statement accompanying the performance, saying:

I picked “My Future” by Billie Eilish as my [Best New Artist] cover for Spotify because the song is beautiful and presents an interesting opportunity to talk about where I am as an artist, especially on the heels of this nomination. My present is moving so fast that each passing moment is practically the future already. And I’m in love with the ride I’m on.

Chika’s ride started in an unconventional way, with a viral freestyle she called an “open letter to Kanye West” that wound up being shared by such hip-hop luminaries as Sean “Diddy” Combs. That exposure led to a Calvin Klein ad, a Warner Records deal, an electrifying television debut, a role in a film, a XXL Freshman placement, and her debut EP Industry Games — all before her debut album was even announced. With a new EP dropping just days before she could possibly win a Grammy Award, Chika will be a winner either way this weekend, earning that Best New Artist moniker through sheer force of will even without a trophy.

Listen to Chika’s cover of Billie’s “My Future” above.

Well… we’re finally here. After a brief postponement, the 63rd annual Grammy Awards will be taking place on Sunday, March 14. As with many awards shows nowadays, things will be presented a bit differently than we’re used to. Per The Recording Academy’s website, there will be a virtual red carpet ceremony and premiere ceremony, where […]

DJ Khaled, HER, And Migos Get Marooned In Their Dragon-Infested ‘We Going Crazy’ Video

If you were ever fell asleep on the couch watching TBS and had a dream combining Castaway, Pirates Of The Caribbean, and The Hobbit, it might look something like the video for DJ Khaled’s latest Khaled Khaled single “We Going Crazy.” The Jamaica-filmed video opens with a shipwreck that finds Khaled and his costars HER […]

With Marvel’s release of the Shang-Chi trailer on Monday, expect kung-fu movies to start making a big comeback in the coming year (if they haven’t already; see Raya And The Last Dragon, the renewal of Warrior on HBO Max, and the recently premiered reboot of the classic show Kung-Fu). It’s likely that no one is […]

Glastonbury Is Hosting A Big Livestream Concert With Coldplay, Damon Albarn, And Others

It was announced at the top of 2021 that Glastonbury will not be hosting a festival this year (for the second year in a row) due to the pandemic. So, while thousands of people won’t be taking to the festival grounds this summer, they can enjoy a newly announced livestream concert that organizers are hosting. […]