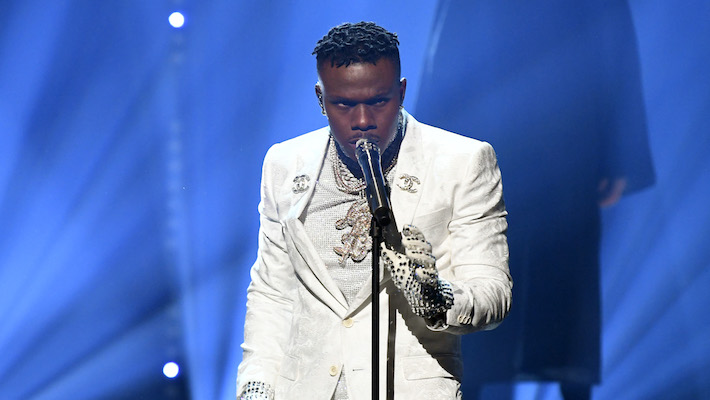 DaBaby is a rapper with a gift for puns, but his performance of “Rockstar” at the 2021 Grammys gave host Trevor Noah such a good setup, it’s almost shocking they didn’t shut the whole thing down immediately after. Backed by a choir of silver-haired, elder singers — comparisons were made to the Supreme Court, which still runs overwhelmingly old and white — DaBaby was joined by Roddy Ricch and Anthony Hamilton for a blown-out performance, with Noah dubbing the backup singers “The Baby Boomers” when all was said and done.

DaBaby and Roddy share three nominations this year for “Rockstar,” which has them both anticipating potential wins for Best Rap Song, Best Rap/Sung Performance, and Record Of The Year. DaBaby’s “Bop” was also nominated for Best Rap Performance, although Megan Thee Stallion secured that award for herself earlier in the evening in the non-televised portion of the proceedings for her Beyonce-featuring song “Savage.” Meanwhile, Roddy himself is nominated for Best Rap/Sung Performance, Best Rap Song, and Song Of The Year for his TikTok-favorite solo single “The Box.”

After his performance, DaBaby barely had time to remove his sparkly driving gloves before returning to the stage to support Dua Lipa on her “Levitating” performance, still shining in his all-white suit.

Dua Lipa’s 2020 record Future Nostalgia was a beacon of light in what shaped up to be a pretty dark year, and the songs off her sophomore album are still echoing through pop music even a year later. One of the album’s early singles, “Levitating” got an upbeat, rollicking verse from North Carolina rapper DaBaby […]

J Balvin will hopefully grace the world with his sixth album at some point this year. The Latin star has seemingly been in high gear with its rollout the past few months and it continues with his latest release. Balvin teamed up with Khalid for their new single, “Otra Noche Sin Ti,” which arrives with […]

Streaming tokens surge as Bitcoin price drops to the $54,000 support

Tokens related to gaming, video and music streaming rallied to new highs even as Bitcoin price pulled back to the $54,000 support.

Last month, Benny The Butcher dropped his The Plugs I Met 2 EP, which featured production exclusively from Harry Fraud. The nine-track effort presented features from 2 Chainz, Fat Joe, Rick Hyde, French Montana, Jim Jones, and the late Chinx. Aiming to keep it alive for a bit longer, Benny and Hyde join forces for […]