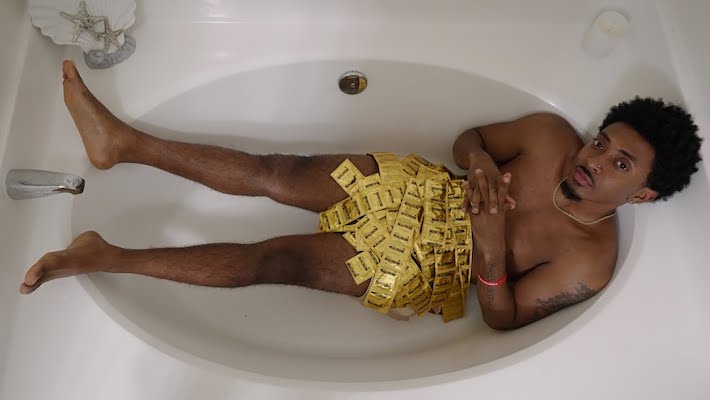 While most would take a break after a new album, Deante Hitchcock has been pushing full-steam ahead. The Atlanta rapper relaunched his freestyle series “NewAtlantaTuesdays” last week with a set of bars over Lil Wayne’s Tha Carter III track “Let The Beat Build.” Hitchcock started the series earlier in his career as a way to bring attention to himself andto increase his following. Now he’s heading back to it in order to flaunt his fiery display of lyricism, and in its latest installation, he takes on SpottemGottem’s track “Beat Box“.

The new video for the song finds Hitchock rapping for nearly two-minutes about women. He makes it clear that he does not seek an exclusive relationship; a night of love-making with a woman will do. Throughout the video, Hitchcock also does the dance that accompanies the TikTok challenge to SpottemGottem’s “Beat Box” in various places, from on top of a car and in the middle of a street to a parking lot and even inside a store.

The freestyle arrives after Deante kicked off 2021 with a live version of his 2020 album Better. The updated release was delivered with videos from the performance.

Check out the “Beatbox” freestyle in the video above.

The U.S. House of Representatives on Tuesday passed the PRO Act, which supporters called the most significant labor legislation in decades and opponents characterized as a gift to unions at the expense of workers. The bill would provide new protections to workers seeking to unionize and penalize companies that violate workers’ rights. Significantly, amid the […]

In the melancholy video for Lil Tjay’s new single, “Love Hurts,” Tjay and guest rapper Toosii contemplate heartbreak and discover a grisly scene in a mansion when an enemy’s assassination attempt goes awry and catches a bystander in the crossfire. “Love Hurts” is the latest standout from Lil Tjay’s second major-label album, Destined 2 Win, […]

DMX’s death has hurt a lot of people all throughout the entertainment world, with many taking to social media to show the late rapper love and send their condolences. His passing may hurt few more than his ex-wife Tashera Simmons, however, as it came just a day before her 50th birthday. The two got married […]

Tee Grizzley switches up his flow on his new song “White Lows Off Designer” — a likely side effect of collaborating with one of the most melodic rappers out, Lil Durk. The woozy-sounding single finds the two Midwestern MCs reflecting on the street code — “Loyalty no option / Please don’t start no drama” — […]