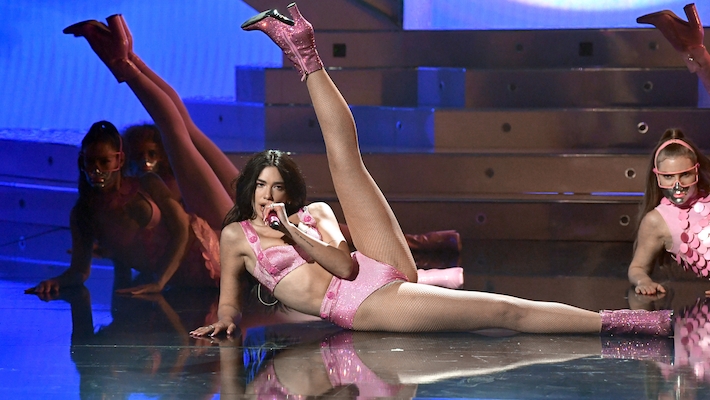 Dua Lipa’s 2020 record Future Nostalgia was a beacon of light in what shaped up to be a pretty dark year, and the songs off her sophomore album are still echoing through pop music even a year later. One of the album’s early singles, “Levitating” got an upbeat, rollicking verse from North Carolina rapper DaBaby on a worthy remix, and tonight the pair united on the Grammys stage to deliver a live rendition.

Although another remixed version of the track includes Madonna and Missy Elliott, as part of Dua’s Club Nostalgia remix album that doubles as a love letter to the classic electronic music and club scene, DaBaby’s version is still the one that fans gravitate toward the most. She’s up for six nominations this year, including Album Of The Year, Best Pop Vocal Album, Best Pop Solo Performance and Song Of The Year and Record Of The Year for “Don’t Start Now.”

For tonight’s performance she sported a massive, fluffy pink princess dress replete with sparkles and massive sleeves, matched with pink eyeshadow and a pink mic, before ditching it for a sparkling pink blazer when DaBaby casually strolled back onstage to deliver his verse. After rejoining him, she pulled off yet another outfit change, stripping down to a pink sparkling bikini to launch into “Don’t Start Now.” A fitting medley for a star who should’ve been performing in arenas all year, Dua proved she earned that Best New Artist Grammy last year over and over again. Watch below.

During the lead-up to this year’s Grammys, Bruno Mars and Anderson .Paak made it clear that they wanted their new supergroup, Silk Sonic, to perform during the broadcast. They made a big stink about it on Twitter, trying to convince the Recording Academy to give them a performance slot during the 2021 ceremony. As many […]

While riding high on the streaming success of their recently released compilation album Slime Language 2 and collaborative single “Ski,” Young Stoner Life Records rappers Gunna and Young Thug performed a little community service over the weekend, paying bond for 30 inmates of the Fulton County Jail according to Atlanta local news. The two Atlanta […]

Instead Of Retiring, Cardi B Thinks Selena Gomez Should Enter ‘A Bad B*tch Era’

A new Vogue cover story about Selena Gomez features a disheartening quote from Gomez, in which she suggests that she’s thinking about retiring from music due to a lack of respect. Gomez said, “It’s hard to keep doing music when people don’t necessarily take you seriously. […] I think there are a lot of people […]

Live music and entertainment has been necessarily put on hold during the advent of the coronavirus, where close proximity and large crowds are too risky as “super spreader” events to be legally happening. But now that vaccine rollout has begun, the booking behemoth has made it clear that next year, live events and live music […]

Blockchain tech has a solution to secure your email