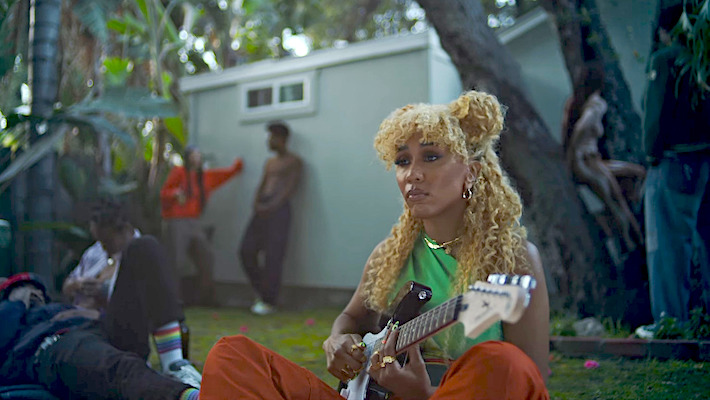 Things have been going great for upcoming R&B artist Fousheé lately. Last week, her breakout hit “Deep End” made history by being the first single by a Black woman to hit the top 10 of the Billboard Alternative Airplay chart in over 30 years. Now, she has a new collaboration with one of the biggest names in hip-hop history, as she and Lil Wayne have shared a video for the uplifting “Gold Fronts.”

Fousheé spoke about the track with Apple Music’s Zane Lowe and explained how she and Wayne came to collaborate:

“I was like, ‘How did you find me?’ And he was like, ‘Well, I’m not really on social media. I don’t search for artists. I have two TVs in my skate room. One is on ESPN, one is on Revolt, and the TV just plays music videos back to back. It’s like, if you end up on that screen and I like you, then I know it’s meant to be.’ And then he was like, he was skating and he saw the video, the ‘Deep End’ video. And it stood out to him because he thought it was like a movie. […] Then he saw me pull out a guitar and he was like, ‘No, stop. Stop the music,’ because I guess he was playing music. […] And he stopped and he listened to it. He was like… he really liked what he heard. The guitar stood out. It’s crazy.”

Check out the “Gold Fronts” video above.

Few things have survived for as long as gold, and few likely will. Ever since the dawn of history, humans have been drawn to the precious metal to store value, transact, and even hold religious ceremonies in (alleged) communication with deities. Evolving with the times Technology takes things to unexpected places, and even something as […]

It was reported a few days ago that DMX experienced a drug overdose. The latest reports indicate that he is still in the hospital. The rapper has received an outpouring of support from his musical peers since the news broke, and now Demi Lovato, who has been open about her own overdose, has shared her […]

Although IDK had a strong showing in 2020, the PG County-bred rapper has spent the last few months laying low until very recently, when he released the single “2 Cents” to break the relative silence since October’s “King Alfred.” It seems his warm-up period is going to continue for a bit, as he shares another […]

Lil Nas X has dominated the entertainment world for nearly three consecutive weeks. The streak began with the release of his latest single “Montero (Call Me By Your Name),” followed by its controversial video, and by the even more controversial “Satan Shoes,” a customized pair of Nike Air Max 97s in collaboration with MSCHF. Through […]