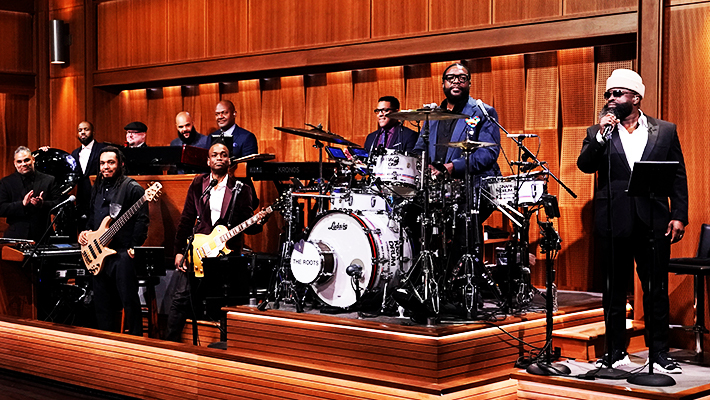 In late 2008, when word broke that The Roots, the hip-hop group led by longtime friends Amir “Questlove” Thompson and Tariq “Black Thought” Trotter, were hired as the house band for Late Night With Jimmy Fallon, the news was met with bewilderment and bemusement. The reactions online tended to be some variation of, “Wow, that is huge for Fallon,” or, as one Gawker writer put it at the time, “The Illadelph generals opening up for that stuttering mop-headed ball of suck, Jimmy Fallon? It’s kind of tragic.”

There was definite logic to the hiring. The Roots remain one of the most versatile ensembles in all of music, comfortable and talented enough to both cover U2 classics at an NAACP event honoring Bono and serve as Jay-Z’s backing band for his legendary MTV Unplugged appearance. And they helped add a whiff of cool to Fallon as he brought his wide-eyed, constantly stoked brand of comedy to late-night TV.

But even the most ardent fan of The Roots had to wonder how this was going to work in reality. The band was coming to NBC after releasing the two darkest and most politically-minded albums of their career — 2006’s Game Theory and 2008’s Rising Down — that raged against school shootings, poverty, and institutional racism. The group was also a consistent concert draw, known for marathon-length performances and welcoming guests from every corner and era of the music world.

Underlying all of this was simple curiosity. How could one of the best hip-hop groups in the game translate their attitude and their sound for network TV, and appeal to middle-of-the-road viewers tuning in for toothless political humor, fawning celebrity interviews, and viral video-ready stunts?

The answer: by The Roots proving just how versatile they could be. For the past 13 years, even as they moved with Fallon from 12:30 am to 11:30 pm after the host was hired to replace Jay Leno as the host of The Tonight Show, the band has been game for anything.

They’ve taken part in various sketches that sometimes require them to dress in drag or act foolishly. They’ve been the backbone for beloved recurring segments like “Freestylin’ With The Roots,” “Slow Jam The News,” and Fallon and Justin Timberlake’s “History of Hip-Hop” bits. And they’ve proven to be welcome comedic foils, with Questlove and Black Thought bantering with Fallon in the manner of David Letterman and Paul Shaffer.

The Roots’ quick evolution into foils for late-night comedy was, in retrospect, inevitable. In an oft-told anecdote, Questlove remembers that, in 2008 when the band and Late Night’s producers were sizing one another up, he invited Fallon to come see them play at UCLA’s Spring Fling not expecting he’d actually show. But the lanky comedian did and quickly won The Roots over.

“I was doing an interview in a trailer,” Questlove told Brooklyn magazine in 2017, “and when I walked out… the eight of them — Fallon and the seven Roots — were making a human pyramid. He was able to disarm us in seconds… And I’m looking at my manager and we just stared there shaking our heads. I was just like, we’re stuck with this guy, aren’t we? And he just looked like, I’m afraid so.” A baker’s dozen years later and they’re still stuck with each other.

By all accounts, the members of The Roots were ready for something approximating a day job. The rigors of touring were starting to weigh on them as it meant leaving behind families and relationships for long stretches of time. As Questlove commented on Okayplayer.com around the time the news broke of their Late Night deal, “I don’t know if I want to be 40 on the road and single no more… I can’t even start to go on that path ‘til a woman takes me seriously. And ain’t no one taking a man serious who is in his home for only three months out the year.”

They were also students of music history, knowing that, although they were in a good spot financially after two decades of being together, they were potentially looking at a slow slide into obscurity. It was to the point that the group was tempted to sign a deal for a residency at The Borgata in Atlantic City.

The twist is, of course, that their nightly platform on NBC has made The Roots more popular than ever before, and, as a result, they’ve become even busier than ever. When he’s not DJing at various events around the world, Questlove has written a handful of books, directed the Sundance-anointed documentary Summer Of Soul (…Or, When The Revolution Could Not Be Televised), and hosts the popular Questlove Supreme podcast. Black Thought keeps popping up on mixtapes and albums by other artists and last year released his debut solo full-length that includes contributions from Killer Mike and Portugal. The Man. Both men are also likely the only hip-hop artists your grandmother would be able to easily namecheck.

What’s perhaps the most impressive part of The Roots’ move into late-night TV is how true they’ve stayed to themselves and the hip-hop culture they grew out of. As proven by the six albums they’ve released since joining up with Fallon, they’ve not lost an ounce of their fury and power. Or for a more concentrated dose, dial up the blistering 10-minute freestyle that Black Thought performed on Funkmaster Flex’s HOT 97 show back in 2017 and went viral shortly thereafter. It’s a testament to both the vaunted realms of celebrity that he and The Roots have reached and his skills as an MC that the performance was analyzed by writers at NPR and The New Yorker — and earned him a spot on the couch at The Tonight Show to talk about it.

That adherence to their personal politics did come at a cost back in 2011 when the band played on Tonight Show guest, and then-Presidential hopeful, Michelle Bachmann with a portion of Fishbone’s “Lyin’ A** B****.” The blowback was considerable and almost cost The Roots their cushy new job in network TV. But after agreeing to clear all walk-on music choices with the NBC brass ahead of time, the band was allowed to keep their spots.

Probably the most concrete example of how The Roots have moved easily into this strange land of TV celebrity while not losing an ounce of their credibility can be found in another video from the Late Night era. In it, the band is doing the job of helping get the crowd warmed up for taping an episode — playing some upbeat music to hype folks up. But for this moment, they’re joined by one of that night’s guests, rapper and actor Ice Cube, and with him, launch into a version of N.W.A.’s “Straight Outta Compton.” It’s a blast. The Roots drill down to the core of Dr. Dre and DJ Yella’s dense production and the rappers do their best to blur out the coarse language of the original song.

The key moment, though, comes when The Roots’ guitarist Captain Kirk Douglas puts down his axe and takes a turn on the mic, rapping Eazy E’s verse. Though they knew it was coming, the whole band seems to explode at that moment, watching their buddy step outside his usual role and play the part of a smack-talking, girl-chasing gangsta MC. Even the person holding the smartphone that’s filming the clip seems to shake with excitement at what is going down. But no one is more delighted than Questlove and Black Thought. As Roberts keeps spitting, they look over at each other with wide grins and sparkling eyes, giddy at what they’re witnessing and what they’re getting away with.

Lil Nas X is diversifying his empire. Aside from music, he recently released a best-selling children’s book, C Is For Country. Now he’s getting into video games, as he has released a new one based on his “Montero (Call Me By Your Name)” video, called Twerk Hero. In the browser game, the player controls a […]

Odds are, you have no idea who FastMoney Goon, Spinabenz, Whoppa Wit Da Choppa, or Yungeen Ace are. But the odds are, you probably know Vanessa Carlton’s “A Thousand Miles,” so the probability that you’ll soon learn about this crop of hot, young rappers shot up exponentially with their savvy sample of the 2001 pop […]

Crypto-art is currently beyond big business as the non-fungible token trading craze continues. The latest high-profile celebrity to get in on the bubble before it bursts is Ja Rule, who bragged of recently selling a painting of the Fyre Festival logo for over $120,000 on the Flipkick market. It was painted by Tripp Derrick Barnes […]