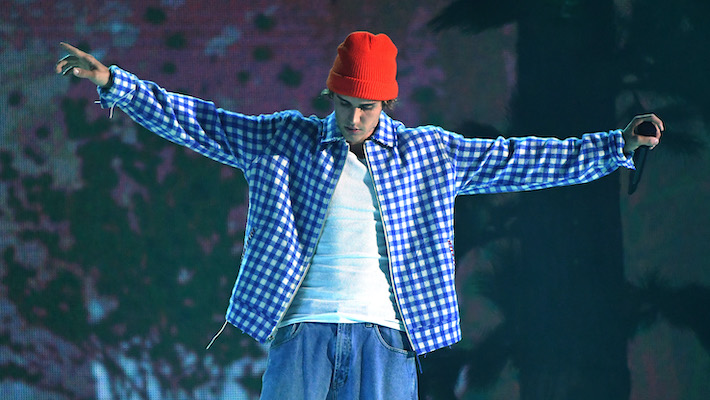 Justin Bieber’s tracklist for Justice, which he shared on Instagram last night, has fans buzzing with excitement. In part, it’s because the album is just a week and some change away from its March 19 release date, but many fans took note of some of the notable guests, who include R&B singers Daniel Caesar, Giveon, and Khalid, as well as Chance The Rapper. Juice WRLD protege The Kid Laroi appeared on Justin’s corkboard as well, inviting some pretty apt comparisons between the two artists despite their generation gap.

While fans had previously deciphered some of Justin’s collaborators via the synopsis on the Walmart pre-order page for the album, this is the first glimpse we’ve had at who all’s on which tracks — and seeing Daniel Caesar and Giveon’s smooth baritones grouped together on “Peaches” has prompted its share of enthusiastic reactions. Both Caesar and Giveon’s names trended on Twitter as fans expressed their anticipation to hear that particular melange of voices together for the first time.

One fan, however, was skeptical of Caesar’s placement, demanding an “apology” before they’ll grudgingly give the song a listen. Caesar was the subject of some controversy a couple of years ago after he dared fans to “cancel” him for defending influencer YesJulz from accusations of cultural appropriation. However, others seemed sanguine, pointing out his continued popularity in the years since.

I still need an apology from Daniel Caesar before I listen to his little song w Justin Bieber & Giveon pic.twitter.com/6wTndKKpbK

Y’all literally make Daniel Caesar trend every week because of how severely he was cancelled. If he TRENDS every WEEK that defeats the POINT!!! pic.twitter.com/HRaXICbQGG

One thing is for sure, though: Fans are ready to hear Justice when it releases 3/19 on Def Jam.

Barack Obama hasn’t been the president of the United States for over four years now, but he still has plenty of admirers who are eager to hear from him. That especially true of his music preferences, as he often shares well-received playlists. Fans were surely delighted a few weeks ago, then, when the former POTUS […]

With her new EP dropping this week, Chika stopped by Spotify Sessions to offer up a soulful performance of her song “U Should,” along with a poetic cover of Billie Eilish‘s “My Future.” In a funny twist, Chika is up for the Grammy Award Eilish won at last year’s ceremony, Best New Artist. She noted […]

Van Buren Records Might Be ‘Bad For Press,’ But Their New Album Is Too Good For That To Matter

The RX is Uproxx Music’s stamp of approval for the best albums, songs, and music stories throughout the year. Inclusion in this category is the highest distinction we can bestow, and signals the most important music being released throughout the year. The RX is the music you need, right now. Collaboration is nothing without chemistry. […]