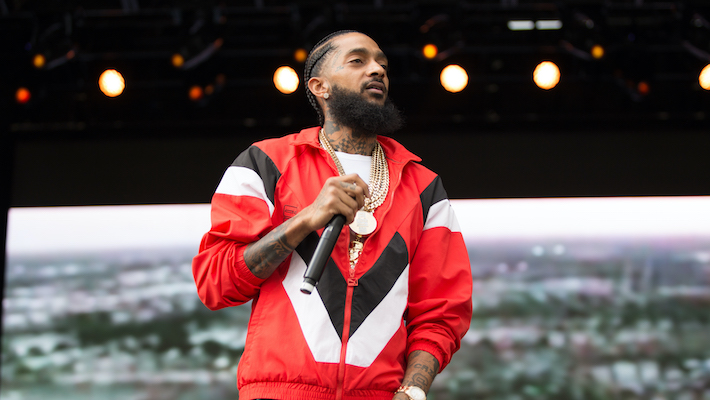 March 31 is a day that will forever remembered in hip-hop history: On that date in 2019, Nipsey Hussle was tragically shot and killed at his Marathon Clothing store in Los Angeles. His death shook the music world, leaving many to grieve a loss that came at the height of his career. On the two-year anniversary, his longtime girlfriend, Lauren London, took to Instagram to honor him.

“The Day Of Ermias’ transition changed the course of my life forever,” she wrote in the post. “2 years, and it feels like yesterday and eternity all at the same time. Grief and Healing have been constant companions on this journey.” She added, “In Honor of His life and demonstration… May all of Heaven exalt Your name for all You did on Earth and beyond. Brave and Beloved Soul, Ermias. You are missed deeply. You are loved immensely. You will forever be. I love you eternally,” before signing off on the message with “Your Boogie (blue heart emoji).”

A few weeks ago London shared the special contribution she made to Nipsey’s debut album, Victory Lap. “Fun fact: the voice that says ‘victory lap’ on the album is me,” she said in a post to her Instagram story. London can also be heard on another of the album’s tracks, “Real Big.”

The popular safe-haven asset gold recently posted the lowest settlement in three weeks, as a firm dollar and bond market yields have weakened support for the precious metal. The financial goliath BNY Mellon also published a report about the differences between gold and bitcoin and the study said that the crypto asset “fits the description […]

HER Organizes An Uprising In The Stirring ‘Fight For You’ Video

The video for HER’s “Fight For You” is here. HER’s soulful Judas And The Black Messiah soundtrack single invokes the lasting legacy of the Black Panther Party, so it’s only right that the video does the same. Following a loose storyline, the video observes how the tragic cycle of state violence against Black Americans plays […]

Over the past month or so, NFTs — aka, non-fungible tokens — have been all the rave across the art and tech worlds. Grimes and Twitter’s Jack Dorsey are just some of the big names that have taken it up, and it looks like Post Malone will join them. The Hollywood’s Bleeding singer is teaming […]

Just a week after releasing the charming “Beautiful Mistakes,” Maroon 5 and Megan Thee Stallion take a technicolor tour of LA in the song’s video, which they released today. The video revolves around M5 lead singer Adam Levine driving a pink convertible through a drab CGI cityscape modeled on the streets of Los Angeles. Slowly, […]