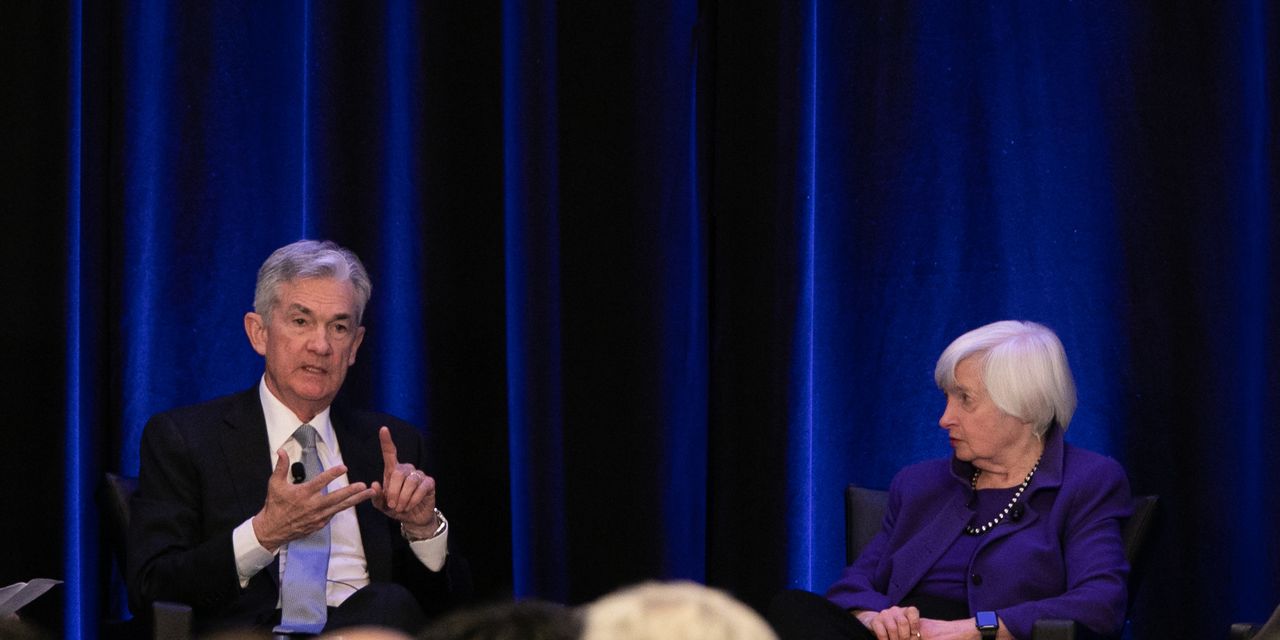 U.S. stocks were mostly lower in choppy trade Tuesday as the first of two days of testimony from Federal Reserve Chairman Jerome Powell and Treasury Secretary Janet Yellen got under way on the state of the government’s efforts to limit the economic damage from the COVID-19 pandemic.

Stocks were choppy as Yellen and Powell appeared before the House Financial Services Committee, with investors looking to glean insight about how regulators will respond to a rapid economic recovery and its potential to ignite long-dormant inflation.

In prepared remarks released on Monday, Powell said that the U.S. economy has recovered more quickly than generally expected “and looks to be strengthening,” but cautioned that the comeback is far from complete.

‘Today, the overall market appetite will depend on the outcome of the testimony of Fed Chair Jerome Powell and U.S. Treasury Secretary Janet Yellen,” wrote Charalambos Pissouros, senior market analyst at JFD Group.

Powell has tried to communicate a stance that underscores the central bank’s desire to keep benchmark interest rates low while the labor market recovers from the impact of lockdown measures implemented to combat the coronavirus pandemic but some critics fear that policy makers may lose control of that narrative.

“The released statement last night reinforced the Fed’s optimism about the glide path of the current economic rebound, but also reiterated that the recovery was in the foothills, and support was set to remain for the foreseeable future,” wrote Michael Hewson, chief market analyst at CMC Markets UK, in a note.

Tuesday also marks the anniversary of the pandemic lows on March 23, 2020, when all of the major U.S. stock benchmarks put in their bear-market lows, as the coronavirus pandemic plunged the U.S. into recession, before staging a powerful rebound, aided at least partly by a cocktail of fiscal spending and monetary-policy intervention.

Thus far, the rollout of vaccines has helped to mitigate some of the effects of the pandemic but economic recovery has come in fits and starts, with Europe showing signs of another burst of infections.

Indeed, rising COVID-19 cases in Europe have fueled recent lockdown extensions in Germany, France and Italy. Oil futures tumbled sharply as a result, weighing on the energy sector, which fell 0.8%, on fears for reduced summer travel and energy demand.

On the vaccine front, federal official said early Tuesday that the results of a U.S. trial of AstraZeneca’s COVID-19 vaccine may have included “outdated information,” providing an “incomplete view of the efficacy data.

Meanwhile, expectations the Biden administration will press for another round of heavy spending centered on infrastructure were seen underpinning equities, though investors were also weighing the prospect of partially offsetting tax hikes.

Bullish investors are looking for a continuation of the so-called reflation trade, with expectations for U.S. economic growth to surge as past rounds of spending and vaccine rollouts allow a broader reopening of businesses, while pandemic-related snags in supply chains could exacerbate inflationary pressures, at least over the near term.

Those expectations have helped fuel a rise in bond yields, which have reinforced a rotation away from technolgy shares and other growth-oriented companies toward more cyclically sensitive shares expected to benefit more from the economic reopening.

“We think investors should continue to position for reflation, especially as inflation, stimulus, and economic growth begin to pick up speed,” said Solita Marcelli, chief investment officer for the Americas at UBS Global Wealth Management. “But while higher yields will continue to spark uneasiness among growth stocks, long-term investors could use volatility as a way to build up strategic positions in select growth themes, as well.”

New home sales occurred at a seasonally-adjusted annual rate of 775,000 in February, according to the U.S. Census Bureau. That was 18.2% down from the upwardly-revised pace of 948,000 in January and well below the consensus forecast of 879,000.

How are other markets trading?

The American news magazine Time has revealed it is getting into the cryptocurrency and blockchain space, as a new job listing shows the 98-year-old publication is in search of a chief financial officer (CFO) who understands bitcoin. Additionally, Time will be selling non-fungible token (NFT) assets via Superrare and in 30 days, the news outlet […]

BANGKOK (AP) — Shares were higher across Asia on Friday after a strong gains on Wall Street driven by hopes for a powerful recovery from the pandemic. Tokyo, Hong Kong, Seoul and Shanghai all gained and U.S. futures also were higher. Hopes that economies will regain ground lost since last year’s first outbreaks of coronavirus […]

Peter Morici: The one thing Biden misses with his semiconductor war with China

President Joe Biden has embraced much of former President Donald Trump’s trade policy. The tariffs hitting many allies as well as foes on aluminum and steel appear unlikely to go away soon, and the broad Trump tariffs on many Chinese goods appear entrenched. Biden has replaced America First with an emphasis on the impacts of trade policy […]

: Biden administration to reinstate fair-housing policies dismantled under Trump — including one aimed at combatting residential segregation

The Biden administration has begun its efforts to roll back changes to two key fair-housing policies that were altered during the Trump administration. On Tuesday, the Department of Housing and Urban Development submitted draft versions of the fair-housing rules to the Office of Management and Budget for review. The move comes months after President Joe […]