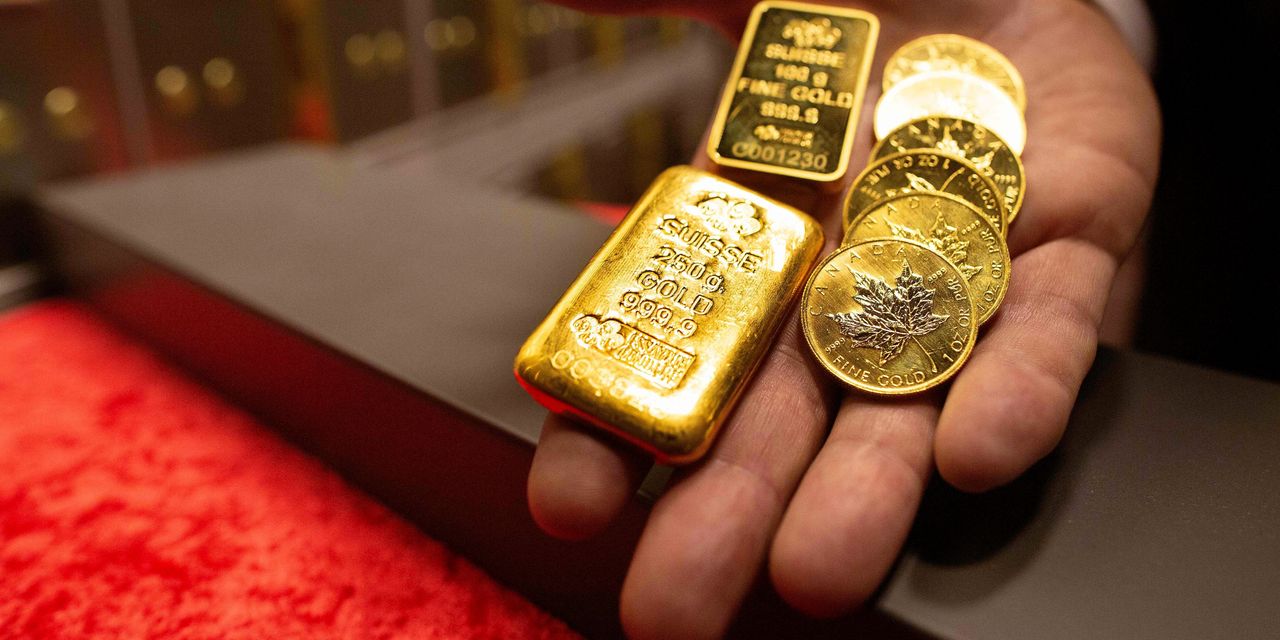 Gold futures headed lower on Monday, with strength in the U.S. stock market led by gains in technology stocks, prompting prices for the metal to ease back after settling last week at their highest since late February.

A collapse in the Turkish lira, meanwhile, also contributed to losses for gold, with the weaker currency likely to dull gold demand from Turkey, analysts said. A report from the World Gold Council in January showed that Turkey was the biggest annual gold buyer in 2020, adding 134.5 metric tons to its official gold reserves.

Bullion’s move lower to start the week comes even as U.S. Treasury yields and the dollar are staging a modest pullback that would ordinarily offer a runway for gold prices.

Gold and silver prices were “pressured by some fresh chart-based selling and by global stock markets that are stable amid bond yields declining a bit to start the trading week,” wrote Jim Wyckoff, analyst at Kitco.com, in a daily note.

Meanwhile, May silver SIK21, fell 62 cents, or 2.4%, to trade at around $25.70 an ounce, following last week’s 1.5% weekly climb. Based on the most-active contracts, prices were poised for their lowest settlement since March 8, FactSet data show.

Silver, as well as platinum, are taking their cue from gold Wednesday, “slipping with the yellow metal amid the central-bank turmoil at its No.5 consumer nation, Turkey,” Adrian Ash, director of research at BullionVault, told MarketWatch.

Turkey’s currency and stocks collapsed after the abrupt termination of its central bank head.

“Broader commodity markets are also trying to rally after taking fright at the rise in borrowing costs spurred by their own bull market,” said Ash. That can contribute to losses for haven gold.

The publicly-listed bitcoin mining rig manufacturer Ebang has announced the completion of a new 6nm ASIC mining chip. Ebang believes the next-generation mining chip will give the firm’s ASIC products a “competitive edge” in the ambitious bitcoin mining industry. Mass Production of 6nm Chips to Begin When Market Conditions Become Suitable During the last few […]

News Corp is nearing an agreement to purchase the consumer arm of educational publisher Houghton Mifflin Harcourt Co., according to people familiar with the matter, which would mark the media company’s second deal in less than a week. The deal, which the people said could be announced as early as Monday, would add a portfolio of high-profile novels […]

International Business Machines Inc. shares rallied in the extended session Monday as the tech giant not only topped Wall Street estimates and broke a streak of declining revenue levels but forecast a return to pre-COVID-19 growth levels. IBM IBM, -0.35% shares, which had initially surged nearly 5%, were last up 3.3% after hours following the […]

Prince Philip, Duke of Edinburgh led a remarkable life — and a most unusual one — at the very epicenter of British public life, which also touched a wide range of business organizations. He will be remembered as Queen Elizabeth II’s great support throughout her reign, the longest serving and living consort in British history. […]