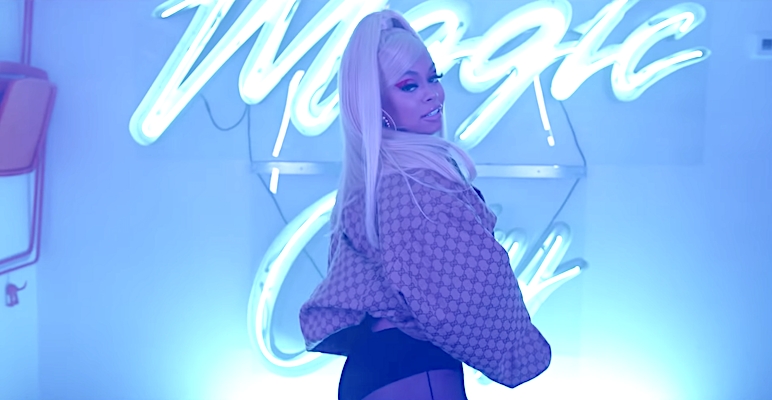 Every few years, hip-hop produces a song with a beat so compelling that it becomes virtually inescapable as one rapper after another dips into the freestyle pot to deliver their own unique (or not so unique) take on the original. In 2019, that song was Blueface’s “Thotiana,” which spawned multiple remixes, including entries with Cardi B, Nicki Minaj, Soulja Boy and Tyga, and YG. In 2021, it appears that Spotemgottem’s song “BeatBox” has become the ubiquitous juggernaut du jour, as both DaBaby and Deante’ Hitchcock posted freestyles in the past few weeks. Today, another artist threw her hat in the ring: Mulatto.

Incidentally, the 2020 XXL Freshman is the one best known for her freestyles, as her ability to rhyme about myriad topics was instrumental to her 2016 victory on the inaugural season of The Rap Game. That skill asserts itself here, as Mulatto acquits herself in a self-confident, boastful freestyle during a photoshoot covering her expeditious come-up in the wake of signing her record deal with RCA at the end of 2019.

Muatto’s made the most of her momentum coming into the new year, appearing on BRS Kash’s bounce record “Kash App,” Rich The Kid’s female-fronted posse cut “Nasty” with Flo Milli and Rubi Rose, and plans her impending name change.

Ripple and Youtube had ended a legal battle initiated in April last year amid allegations related to crypto-related scams. The U.S. blockchain company sued the video platform for negligence in acting against crypto scams that impersonated Ripple. Terms of the Resolution Are Confidential During a Twitter thread, Ripple’s CEO Brad Garlinghouse announced both parties have […]

Chika Roasts Perez Hilton For Intentionally Misgendering Her: ‘You Wanted To Defeminize A Black Woman’

Chika is enjoying a fairly good start to her 2021 year. She attended this year’s Grammy Awards in addition to being a nominated act in the Best New Artist category. She’s also a little over a week removed from the release of her Once Upon A Time EP. Despite this, she still faces disrespect from […]

Doja Cat‘s given some memorable performances of her No. 1 hit “Say So” over the past year, but when it came to “Music’s Biggest Night,” she pulled out all the stops. Doja, who’s earned a reputation for innovative and elaborate award show performances, made sure her Grammys performance would top them all as she enters […]

Megan Thee Stallion has achieved a long list of things in her short career and thanks to this year’s Grammy Awards, she can add a special accomplishment to her resume. The Houston rapper and Beyonce became the first women to win in the Best Rap Performance category thanks to their “Savage” collaboration. The song originally […]