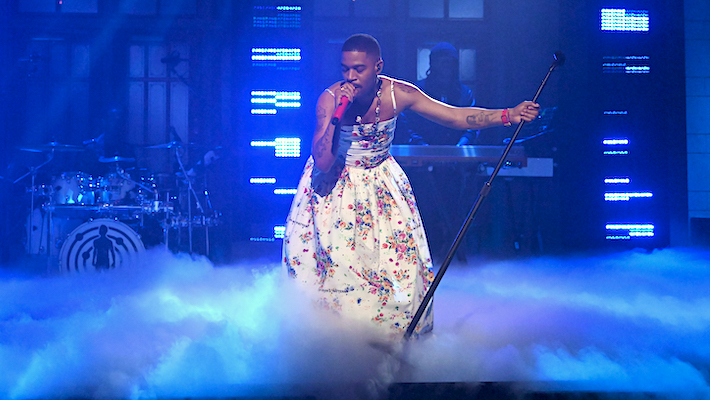 Harry Styles was widely praised for wearing a dress in a photoshoot last year, although some folks didn’t care for it. Recently, Kid Cudi faced a similar reaction to a similar situation after performing in a dress on Saturday Night Live. Now, Cudi’s friend and SNL star Pete Davidson has come to Cudi’s defense, saying on the Breakfast Club that he was all for Cudi’s fashion choice.

“I loved it, I thought it was great,” he said at 24:46 into the interview, which was shared today. “I think, you know, when you get criticism like that, it’s just like, ‘OK, cool. Those are people I don’t really wanna associate myself with anyway, people that are that close-minded.’ I thought it was really cool and like a cool tribute. […] I thought he killed it. I thought it was great. It was also fun to hang with him.”

He then touched on making the sketch with Cudi about “that weird little flute” that pops up in rap songs, saying, “You know me: I’ve been a huge Cudi guy forever, so getting to do a music video with him was everything. […] Cudi did a great job and it was fun. I loved it.”

While this was Cudi’s first time as musical guest on the show, it wasn’t his first time on SNL: He made a brief cameo in the “A New Kyle” sketch from 2018, palling around with Kyle Mooney after Mooney changed his lifestyle to copy Davidson. Of course, Cudi and Davidson were also famously photographed having dinner with Kanye West and Timothée Chalamet in 2019. Back in 2016, Davidson also credited Cudi and his music for saving his life.

Burna Boy Celebrates His Progress With The Upbeat ‘Kilometre’