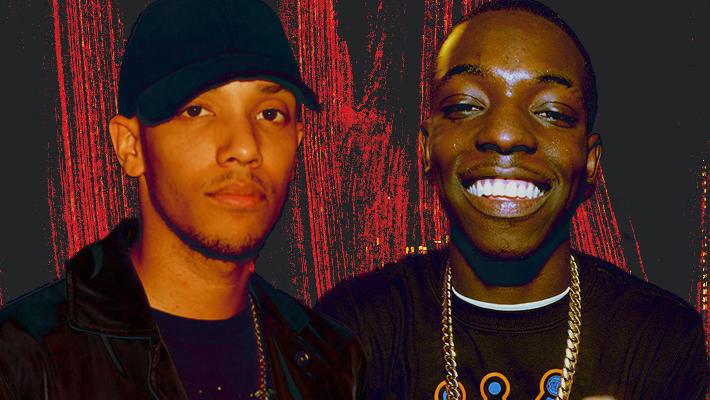 Throughout his 2014 breakout hit “Hot N****,” Brooklyn rapper Bobby Shmurda paints a picture of his experiences with street life, from guns to drugs and everything in between. “Run up on that n****, get to squeezing, hoe,” the piercing lyrics go. “Everybody catching bullet holes, n****s got me on my bully, yo.” The beat, produced by Pennsylvania beat maker Jahlil Beats, is a Chex Mix bag of sonic stylings, from Dirty South trap to the aggressive, then-burgeoning sound of New York drill music, which is a direct look into Jahlil’s regional production influences. (He cites Swizz Beatz and Mannie Fresh as some of his major inspirations.)

The platinum-selling song hit No. 1 on Billboard’s Hip-Hop/R&B charts, and peaked No. 6 on the Billboard Hot 100 in 2014. The official remix — one of many — features Fabolous, Chris Brown, Jadakiss, and Bobby’s fellow GS9 crew member Rowdy Rebel. Coupled with a stand-in-place groove now called the “Shmoney Dance,” the track took the internet and the country (especially New York City) on a viral trip. Artists from Lil Kim to French Montana freestyled over the beat, while Beyoncé hit the Shmoney during the On The Run concert tour with Jay-Z.

“I reached out to [Bobby] and I was just like, ‘Yo, you got my blessings, man, rock out with it,” Jahlil smiles. “[The beat and song] took legs of their own, and I was just grateful. I like to live a normal life, so a lot of things just don’t seem like they could reach that level [for me]. I was like, ‘We got one.’ I didn’t think I was going to catch [a hit] like that — I was just making street music. We ended up going number one, and it didn’t even have a chorus on it. That was the most unique thing about it for me.”

By the start of the 2010s, Jahlil Beats was steadily making a name for himself in the hip-hop world. The music maker (born Orlando Tucker) worked closely with fellow Penn State native Meek Mill on a number of tracks, including the standout 2011 single “Ima Boss” featuring Rick Ross. The infectiousness of the song, which gently steels video game sounds with bass-filled hip-hop, resulted in a six-label bidding war for the producer that same year. (He ended up signing with Roc Nation, and you may recognize his work from the tag “Jahlil Beats, holla at me.”)

From then on, Jahlil provided production assists for Rihanna and J. Cole, and released his Legends Era and Crack Music mixtape series featuring Lil Wayne, Big Sean, and many more. However, no one could have predicted the unparalleled success coming to the then-26-year-old, generated by a young Brooklynite who borrowed one of Beats’ tracks for the score to a growing phenomenon.

“People kept tagging me in clips of [Bobby Shmurda] throwing his hat up in the air, I didn’t really pay it no mind, I didn’t hear the song,” Jahlil, now 33, tells Uproxx via Zoom of his initial response to Bobby’s monster hit “Hot N****.” “I think Kevin Durant tweeted me and he was like, ‘yo, you hear this joint? This joint crazy.’”

For “Hot N****,” then-19-year-old East Flatbush-bred Bobby (born Ackquille Pollard) rapped over the beat to Lloyd Banks’ “Jackpot,” produced by Jahlil and originally released in 2012. Bobby had discovered the beat on YouTube and decided “it was the one.” Jahlil says the track was initially intended for Meek Mill to use, but the rapper thought it sounded too much like his song “Burn.”

A few weeks later, Epic Records’ executive vice president Sha Money XL reached out to Jahlil to inform him the label wanted to buy the beat, and that they were working to sign Bobby. The producer confirms Epic bought both “Hot N****” and Rowdy Rebel’s song “Shmoney Dance,” which Bobby is featured on. Jahlil was optimistic about taking his working relationship with Bobby to the next level by producing his debut album under Epic Records. However, a major blindside truncated the project during its developmental stages.

In December 2014, one month after the release of his EP Shmurda She Wrote, Bobby and 14 other members of his crew GS9, including Rowdy Rebel, were arrested. Bobby was charged with conspiracy to commit murder, reckless endangerment, drug possession, and gun possession. According to reports, the NYPD had been investigating GS9 (which stands for a plethora of things, including “Grimey Shooters,” “Gun Squad” and “G-Stone Crips,” according to the NYPD’s reports) for felonies and deadly altercations with rival gangs in the Brooklyn borough since before “Hot N****” became a hit. Former police commissioner Bill Bratton called GS9 “mindless thugs” at a press conference regarding the investigation. Held on $2 million bail, Bobby’s sentence carried a potential length of eight to 25 years.

“The last session I had [with Bobby and Rowdy] was for Juelz [Santana’s] ‘Time Ticking,’ and then a day or two later, they got locked up,” Jahlil recalls. He was at his house when his manager called with the news, which he “couldn’t believe.” “We were just making music. It was just us having fun, and then, that happened. It’s wild. [I felt like] I put all my eggs in the basket for them and Meek Mill, and the same thing happened.” Since the arrest happened in the early stages of working on Bobby’s album, it wasn’t even given a title yet. “I knew the impact these dudes [were] going to have,” Jahlil says. “I was really behind them a thousand percent, so it was kind of tough to deal with.”

Although additional criminal charges were dropped against Bobby in 2015, he still faced sentencing for drug and gun possession. In 2016, as part of a plea deal, Bobby was sentenced to seven years behind bars. He was first incarcerated at Rikers Island, and was subject to solitary confinement at one point; in 2017, he transferred to Clinton Correctional Facility in Upstate New York. He was denied parole in August 2020, but his credit for good behavior was restored last December. Bobby Shmurda was officially released on Feb. 23, 2021, and he will be under parole for the remainder of his sentence, which ends on Feb. 23, 2026.

“I think that once you go through stuff like that, all you [have] is time to think,” Jahlil says of what Bobby may have learned during his time away. While the producer admits he didn’t communicate too often with his collaborator while he was behind bars, he spoke frequently with the “high-spirited” Rowdy Rebel, who was released in December 2020 after serving a six-year sentence of his own. Rowdy reportedly kept him updated on Bobby, who “sent love.”

“I think that [their sentences] were a gift and a curse,” he continues. “Bobby went in and he lost some years, but that might’ve saved his life, you know? Now he can go and take care of his family and do better.” Since his release, he’s voiced his support for the #FreeHaiti movement and performed during events at NBA All-Star Weekend in early-March.

Despite the stalls in production with two of his most notorious collaborators, Jahlil kept busy during these last few years. He has notably produced for Busta Rhymes’ latest album, Extinction Level Event 2: The Wrath Of God, and he divulged an as-yet-unreleased Justin Bieber/DaBaby collab to Uproxx. He’s also focused his attention on giving back to his hometown of Chester, Pennsylvania, namely by helping underserved residents of the area find affordable housing, developing properties, and running a sneaker store. “We really cracked down on a lot of our business, especially during this time,” he notes of working through the pandemic. “I’m doing stuff for my community and trying to balance that with music and family.”

However, he’s never forgotten about the unfinished business he has with Bobby Shmurda in the studio. The producer says that the sound they were going for during the planning process for his debut album was whatever fit Bobby’s interests, especially since his EP was a mix of several different sounds from different producers — “Wipe The Case Away” features a chorus sung by Ty Real and a subtle R&B vibe, while “Living Life” with Rowdy Rebel takes fans to the trap.

“He was just trying to figure it out,” Jahlil explains of Bobby’s musical direction. “But he ended up having a classic rap record stemming from him just doing him.” He notes he’s “been in touch” with Bobby’s camp and has sent over potential tracks to get their working relationship back in order. He’s also finished “three joints” with Rowdy Rebel.

Regardless of whether they end up cutting that highly-anticipated debut, Jahlil Beats is optimistic about the lessons Bobby Shmurda, his fans, and musical contemporaries can take from the saga. While GS9’s incarceration “stems from many things,” he hopes Bobby can use the incident as fuel to become the best version of himself.

“We all go through roadblocks, that’s just how life is,” Jahlil proclaims. “I think that it might have had to happen this way… Sometimes, you make mistakes, and some mistakes are a lot more drastic than others. Take something from it.”

J. Cole’s Upcoming Album, ‘The Off-Season,’ Is His ‘Best Sh*t To Date,’ According To Dreamville’s Cozz