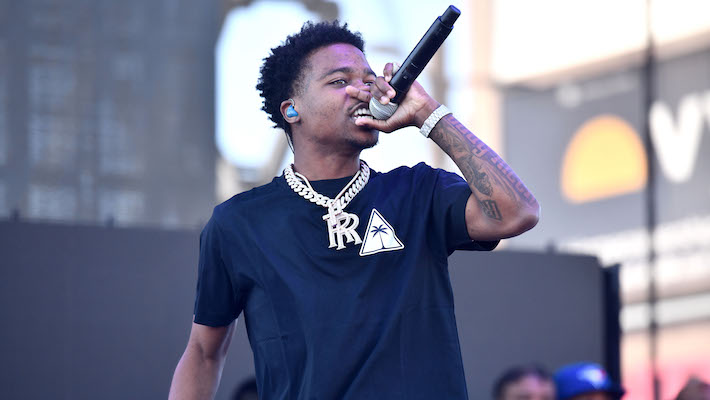 Roddy Ricch has been fairly quiet since dropping his debut album, Please Excuse Me For Being Antisocial, at the end of 2019. Luckily for the Compton native, the music from the project did all the talking for him as it became one of the most popular albums of 2020 thanks to efforts in particular like “The Box,” which tallied 11 weeks at No. 1 on the singles chart.

While the wait continues for his sophomore album, the rapper has slowly emerged from his cave. His last appearance finds him working alongside 42 Dugg on their “4 Da Gang” collaboration. The track is a rambunctious effort that is sure to have you rocking out to the guitar-heavy production, which samples Scoprions’ 1982 track, “No One Like You.”

Prior to the track’s release, Roddy stopped by the 2021 Grammy Awards stage to give an epic performance of “The Box,” which also nabbed a few nominations at the show. A scary moment for fans of the rapper occurred earlier this year when a shooting at his and 42 Dugg’s music video shoot left three people injured, one that was presumably for this song. Roddy eventually revealed that he was not among the injured individuals and the incident eventually resulted in the arrest of rapper OMB Peezy.

Rock out to the new single in the video above.

In the five days after launching on Coinbase, new token listings gain 91% on average. But that doesn’t tell the whole story.

The Academy Of Motion Picture Arts And Sciences revealed the nominees for the 93rd Annual Academy Awards on Monday, with plenty of powerhouse thespians, like Daniel Kaluuya and Lakeith Stanfield, receiving nominations. But a couple big names in the music industry also received quieter acclaim. Diddy and Joey Badass both landed Oscar nominations for their […]

Earlier this month, Beyonce became the most-awarded singer in Grammy history after picking up four wins at the 2021 edition of the music awards. While that was certainly a high moment for her, it occurred around an unfortunate event with the singer’s belongings. On Saturday, TMZ revealed that Beyonce was robbed of more than $1 […]

It goes down in the DMs. Just weeks after Lil Nas X made a TikTok using a screenshot of his Instagram DMs to put Tekashi 69 on blast after Tekashi tried to troll Nas with homophobic jokes, another artist has adopted the format to take her own thirsty messengers to task. Apparently, ever since she […]