Beyonce Now Has More Grammy Wins Than Any Singer Ever

The Grammy For Record Of The Year Goes To Billie Eilish, Again 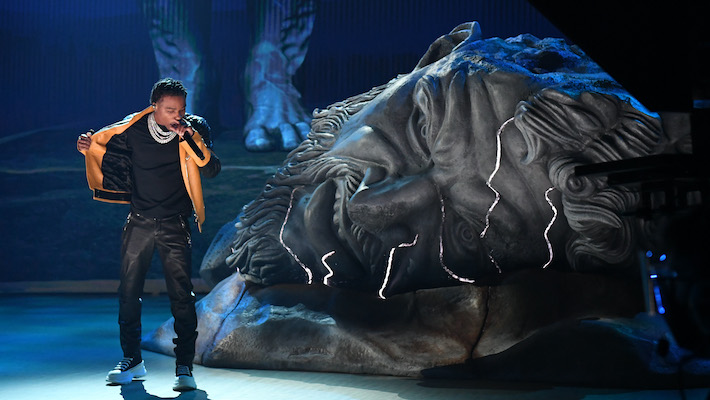 Roddy Ricch has become well-acquainted with the Grammy Awards committee and viewers, receiving three nominations and winning one at last year’s ceremony. This year, he not only added six new nominations to his growing collection but also performed at the ceremony, delivering a sweeping rendition of his song “The Box,” prefaced by a snippet of “Heartless.” The performance was literally epic, featuring a demolished Greek god statue, with Roddy playing a grand piano and backed by a harp.

The Compton rapper has certainly had more Grammy success than his youth and relative inexperience would suggest, thanks in large part to his proximity to the late, great Nipsey Hussle. Their 2019 collaboration “Racks In The Middle” won Best Rap Performance at the 2020 Grammys, just months after he released his debut album Please Excuse Me For Being Antisocial. The song was also nominated for Best Rap Song, while Roddy’s Mustard collaboration “Ballin’” was nominated for Best Rap/Sung Performance.

This year, he’s got even more bites at the apple thanks to his two 2020 No. 1 hits. While his TikTok-favorite solo single “The Box” is up for Best Rap/Sung Performance, Best Rap Song, and Song Of The Year, Roddy’s collaboration with DaBaby, “Rockstar,” has them both anticipating potential wins for Best Rap Song, Best Rap/Sung Performance, and Record Of The Year. The duo performed the song with “Da Baby Boomers” earlier in the evening.

The Grammy For Record Of The Year Goes To Billie Eilish, Again

As one of the big four categories, Record Of The Year is always a hotly contested race. This year, the field was very crowded with viable winners across all different genres. Contenders include the massive “Black Parade” by Beyonce, “Colors” by Black Pumas, the ever-ubiquitous 2020 hit “Rockstar” by DaBaby and featuring Roddy Ricch, “Say […]

Logic Hints At Coming Out Of Retirement On A New Song, ‘Tired In Malibu’

Last summer, Logic released No Pressure, which ended up being his final album before he announced his retirement from music and his pivot to streaming on Twitch. Now, though, the (former?) rapper suggests that he might make a return to music on a short new song he shared yesterday, “Tired In Malibu.” The song runs […]

After a whirlwind summer that saw their collaboration go No. 1, take over the national discourse, and “piss off a bunch of Republicans for no reason,” Cardi B and Megan Thee Stallion finally got to perform a watered-down version of the raunchy “WAP” on the Grammys. Opting to use the clean version — which contains […]

Snoop Dogg Is Releasing Another 19 Crimes Wine, This Time A Rosé

It’s been nearly a year since Snoop Dogg first unveiled his years-in-the-making partnership with Australian winemakers 19 Crimes. He released his Snoop Cali Red bottle last summer, a wildly successful blend that Uproxx named “impeccably smooth.” Now, Snoop returned to announce he has another wine in the works. The rapper once again teamed up with […]