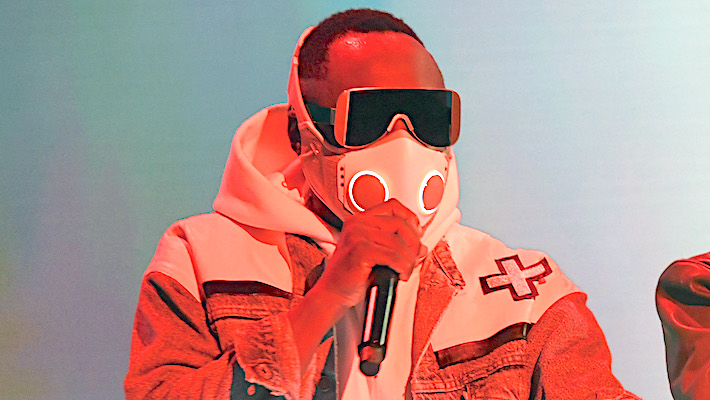 The Black Eyed Peas‘ core member Will.I.Am has attempted to break into the tech industry for years. He even launched a version of a smartwatch back in 2014, a full year before the Apple Watch was released. Though his product didn’t become successful as he’d hoped, Will.I.Am has now unveiled a high-tech version of a face mask.

Will.I.Am teamed up with Honeywell for the new product Xupermask, a $299 “smart” face mask that has Bluetooth and noise-canceling capabilities along with LED lights, a rechargeable battery, and a HEPA filtration system. Per a report from the New York Times, the mask was designed by Jose Fernandez, the same person who created Elon Musk’s SpaceX suits and also lent a hand on a number of superhero movies including Black Panther and The Avengers.

What was Will.I.Am’s reasoning for making a nearly $300 face mask? Well, as he puts it, we’re already “living in sci-fi times,” so we might as well have protective gear that reflects the age we’re in:

“We are living in sci-fi times. [The pandemic] is straight out of a friggin’ movie. But we are wearing masks from yesterday’s movie. So I wanted to make a mask to fit the era that we’re in.”

Though the product was officially announced this week, Will.I.Am has been sporting his Xupermask for several months now. He publicly debuted the mask during his performance with the Black Eyed Peas at the 2020 MTV VMAs, where he sang “Vida Loca” and “I Gotta Feeling” with his face covered by his high-tech mask.

Check out a product photo of Will.I.Am’s Xupermask above and order it here.

In addition to being an art-rap pioneer and a fixture of the stand-up comedy circuit, Open Mike Eagle also records a podcast titled What Had Happened Was on his own podcast network. In its debut season last year, Mike interviewed guest Prince Paul for 12 episodes of the tales behind some of the legendary producers […]

Seattle rapper Lil Mosey — whose real name is Lathan Moses Stanley Echols — is the subject of a warrant in his home state after he was charged with second-degree rape several weeks ago, according to TMZ and The Chronicle. The warrant was issued after he failed to appear for a court date yesterday (April […]

Although Playboi Carti didn’t technically release a new album this year, he has still been one of 2021’s biggest artists so far. He dropped his sophomore effort Whole Lotta Red on December 25, 2020, the final Friday of the year, and it went on to become his first No. 1 album. Now he’s keeping the […]